Finding Reproductive Justice in the Face of Cannabis Stigmatization 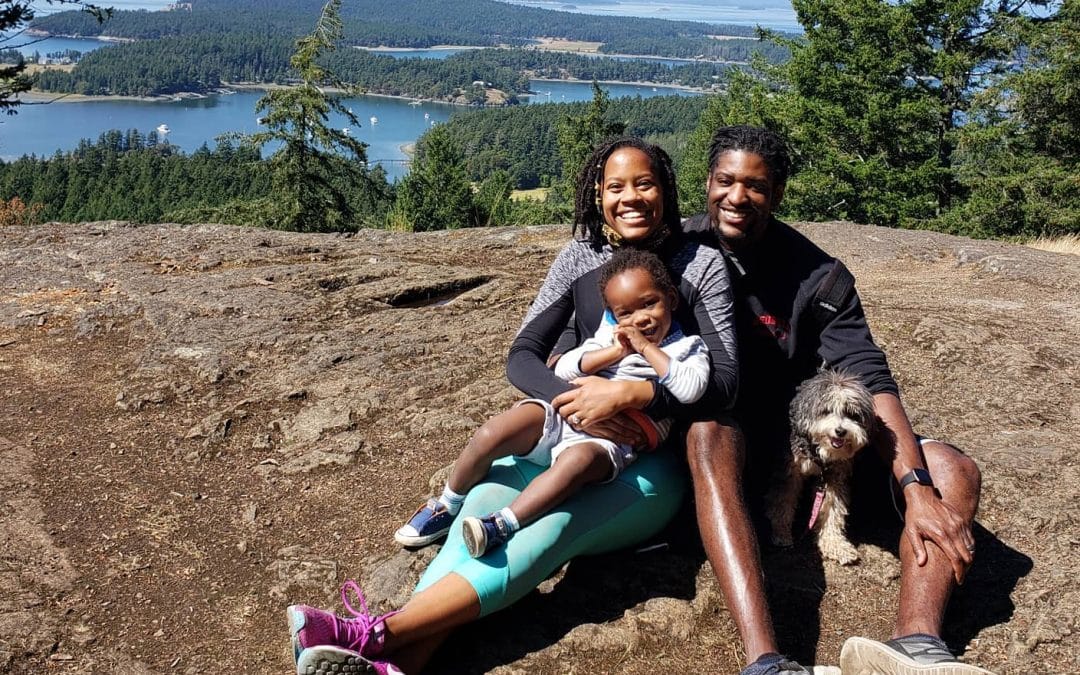 Moms and gender non-conforming parents find hope in each other

When we think about the ripple effects of cannabis prohibition and the impact the “War on Drugs” has on people of color (PoC), the conversation usually begins and ends with mass incarceration. But mass incarceration is only one example of our government criminalizing PoC for consumption of cannabis.

While the “War on Drugs” largely targeted men and boys, bias existing in healthcare and social services is criminalizing women, girls, and gender non-conforming, childbearing people.

Through canna-mom blogs, social media influencers, and even CEO’s within the industry, it’s clear many people who bear children are using cannabis medicinally. Advocates are sharing their experiences as mothers and parents. While there’s been some change in public opinion around cannabis, there’s still an incredible amount of stigma and racial bias that impacts pregnant people who medicate with the plant.

Black, American Indian, and Alaska Native (AI/AN or Indigenous) women are two to three times more likely to die from pregnancy-related causes than white women – and this disparity increases with age, according to the CDC . This means Black women and Indigenous childbearing people are 243% more likely than white people to die from pregnancy or childbirth-related causes.

“That’s always something in the back of my mind, the fact that I could die, my baby could die,” Brittany Parker, founder of A Green Legacy, an organization that supports and empowers underrepresented cannabis entrepreneurs, says. “When it comes to having more kids, it’s something that I think about all the time. I’ve now had three friends who have almost died in childbirth.”

Serena Williams, one of the best female tennis players of all time, brought attention to this issue when she nearly died from a pulmonary embolism after giving birth to her daughter Olympia. A 2016 study of New York City found that, “Black non-Latina women with at least a college degree had higher severe maternal mortality rates than women of other races/ethnicities who never graduated high school.” These disparities in maternal and infant mortality are largely credited to structural racism in health care and social services, regardless of class or education.

A major contributor to the dangers of childbirth for Black, Indigenous and other PoC women and gender non-conforming people is cesarean sections, which doctors often opt for instead of natural vaginal births. This was the case for Parker.

“I knew that wasn’t actually something I wanted, but it was really presented as, ‘This is your only option,’” Parker says. Her doctor presented a cesarean for giving birth to her unborn son because, in her twenties, she had surgery for fibroids, a condition also more common for Black women. “One thing that I had to my advantage is a friend, who was another Black woman, invited me to a breastfeeding group for Black women, and through that group, I was able to learn a lot about the discrimination women of color experienced within their birthing process. I ran into a lot of other women who were presented with C-sections as an only option. And, for quite a few of them, it wasn’t even a situation where there was really a medical need, it was just presented as the best route.”

A cesarean, also known as a c-section, is the most common major surgery performed in the U.S., according to 2016 CDC data, even though it can come with major risks for the parent, including  hemorrhaging, transfusions, infection, and blood clots. For newborns, the risks include higher rates of breathing problems, surgical injury, and lower overall health scores compared to babies born vaginally. A survey of California mothers reported a C-section rate of 42% for Black women, compared to 29% for white women. This higher trend is also true for Latinx and Asian people.

Parker came back after meeting with the breastfeeding group equipped with the information she needed to advocate for herself.

“I felt like I had to advocate really hard in order to have a vaginal birth, which is what I wanted. Things went fine, but it did take a lot of advocating on my part, and my doctor made it sound like it was almost certain that my uterus would rupture,” Parker says. “If I could say anything to women who are going through the process of having children, it is to research what their rights are. Question everything. There’s nothing wrong with questioning your doctor. Doctors are human too, they have limitations in their own knowledge.”

Barriers to Breastfeeding or Chest-feeding

Another major issue in maternal health and services is there are many barriers that make it difficult for new parents to breastfeed. A 2014 study revealed that facilities located in areas where there is a high population of Black residents were less likely to recommend practices supportive of breastfeeding and more likely to offer formula. Parker, who had her son in Washington state, relates to this statistic.

“I felt like I was presented with so many other options outside of breastfeeding,” Parker says. “It felt as if the assumption was that I just automatically wouldn’t breastfeed. It was one of those situations where I was being treated differently … and it felt like there was bias that was just so subliminal.”

The American Academy of Pediatrics recommends pregnant mothers and parents breast or chest feed for the first six months exclusively and then introduce foods, while continuing to breastfeed, until a child is 12 months.

“There are so many barriers to breastfeeding for black women,” Parker says. The CDC also cites many of these barriers and disparities.

Returning to work can make it difficult to breastfeed, especially for many low-income families who do not have the privilege of taking paid time off or breastfeeding at work.

Marginalized canna-parents who decide to medicate during or post pregnancy may face another barrier as well. 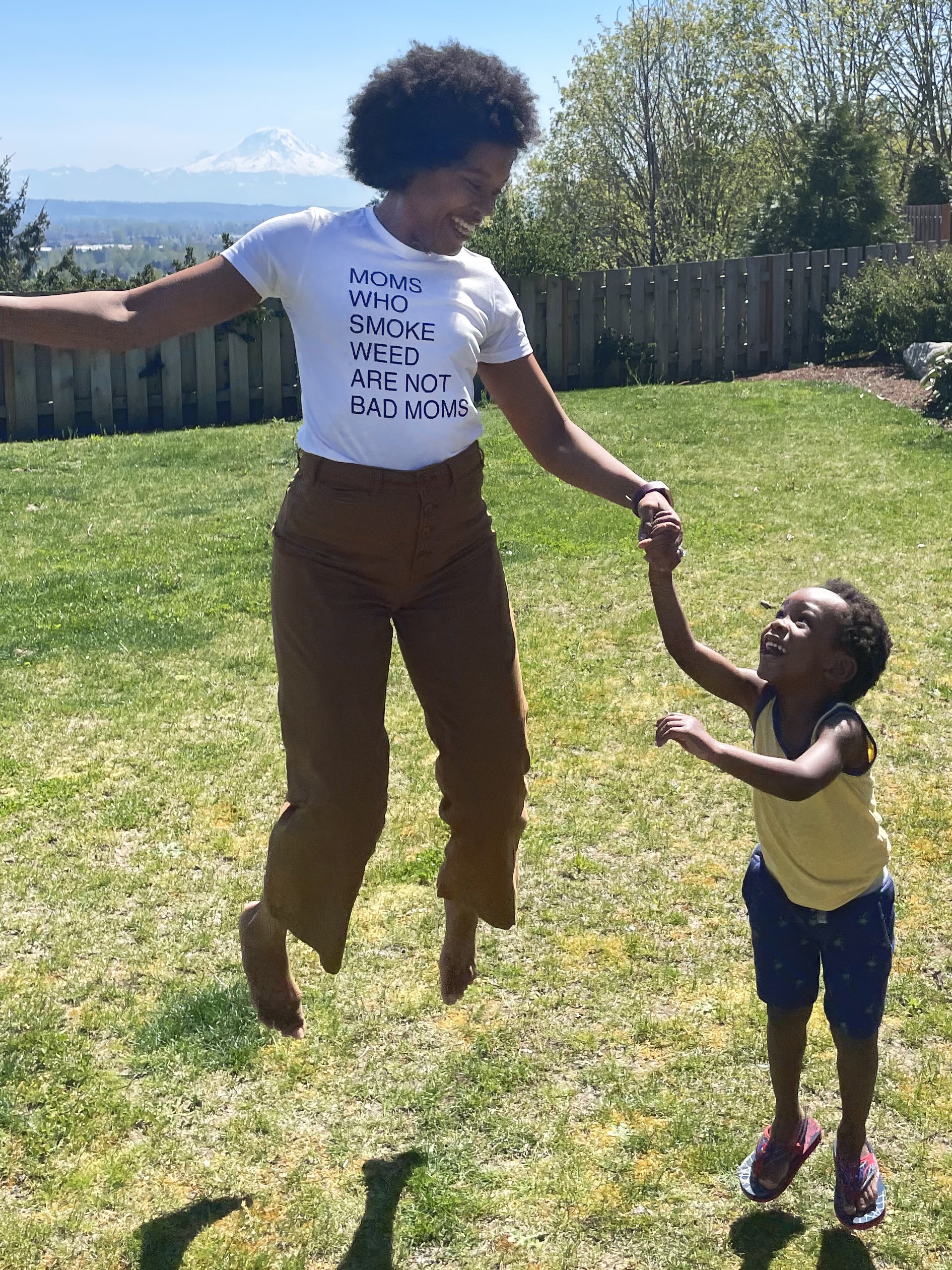 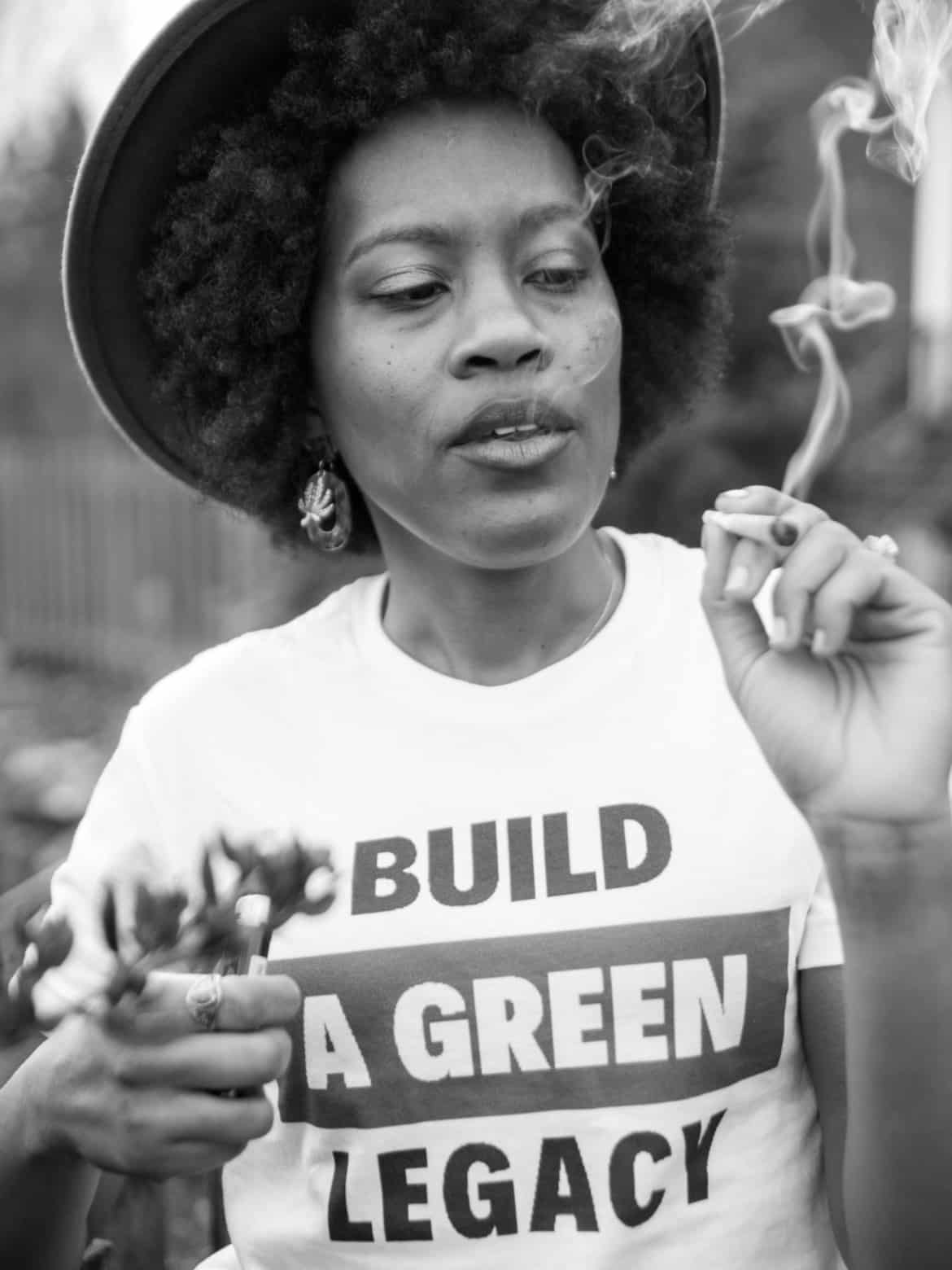 Pregnant mothers use cannabis for a host of different ailments, from morning sickness and body aches and pains, to loss of appetite and more serious ailments like anxiety or hyperemesis gravidarum. But because cannabis is still federally illegal, parents are having their children removed from their homes, sometimes right after giving birth, even in states where the plant is considered legal.

I experienced this early on as a young mother-to-be. I chose to start nursing right away – an undertaking that was more painful and difficult than I was prepared for – so when a nurse tiptoed into my room that night and started to take my daughter from my arms while I was sleeping, I was alarmed. I asked the nurse why she was taking her, and she told me, “To take some tests.” When I asked her what kinds of tests she told me that they were taking my daughter to test her for drugs.

During my first trimester, I consumed cannabis because it gave me enough relief in the morning that I was able to keep breakfast down. It helped me gain back the weight I’d lost, and I was able to rest peacefully at night. But out of fear of having my unborn child taken from me if I continued consumption, I ignored the medicinal benefits of cannabis and stopped.

Fast forward to only hours after giving birth, and my fears had been actualized. I refused to allow the nurse to take my child and asked to speak with the doctor, who made the order in the morning. The doctor told me that allowing them to test my newborn daughter for drugs, “would look good to a judge if you are ever involved with Child Protective Services.” As a mixed race, Mexican and Ojibwe femme, with a Mexican partner who was tattooed from his neck to his hands, this felt like bias at work.

Black, Indigenous and other PoC youth are removed from their homes by Child Protective Services and placed in foster care at much higher rates than white youth. In New York, this is the case for Black youth, who are removed at double the rate of white youth. More specifically, Black, Indigenous and other PoC youth from poorer families are overwhelmingly represented.

Don Lash, an attorney who has practiced in the areas of disability rights, education, and child welfare pointed out in his book, “When the Welfare People Come,” that, “Child welfare involvement in the United States has always been associated with the children of the poor. In Wisconsin in 2008, for example, a child living in a home with less than $15,000 in household income was six times as likely to be involved with the system as a child from a home with a higher household income.”

Child welfare reflects systemic injustices in the U,S., according to Dorothy Roberts, the author of “Shattered Bonds: The Color of Child Welfare.” In an essay titled “Race and Class in the Child Welfare System,” she articulated this point, “The child welfare system is designed not as a way to assist parents in taking care of their children but as a way to punish parents for their failures by threatening to take their children away.”

Evidence suggests that social policies like the Earned Income Tax Credit strengthen the economic security of low-income families, yet low income mothers are still being arrested and criminalized for what is deemed “neglect.” By one account, “Three-quarters of substantiated child maltreatment cases are related to neglect, and the kind of neglect that triggers a CPS case is almost always the result of poverty.” This can be even further compounded for canna-moms and parents because of the stigma of being considered a “drug user.” But the open and outright advocacy for medical and recreational cannabis has helped destigmatize this flower for mothers.

“I try to show the juxtaposition between using cannabis, being in the cannabis industry, also being a great parent, also being a wife and having a family. I really try now to be extremely open about that.” Parker says. She uses her platform to illustrate that you can be a parent, have a “normal” life, and also consume cannabis regularly – just as others imbibe a glass of wine or beer at the end of the day. 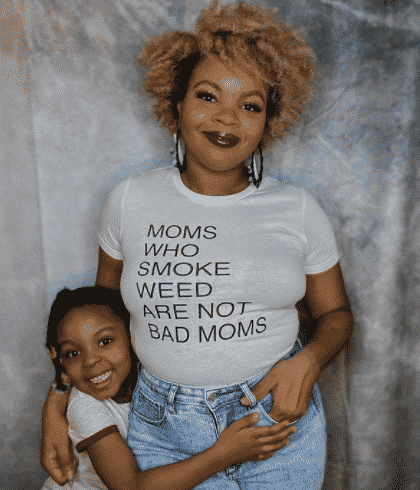 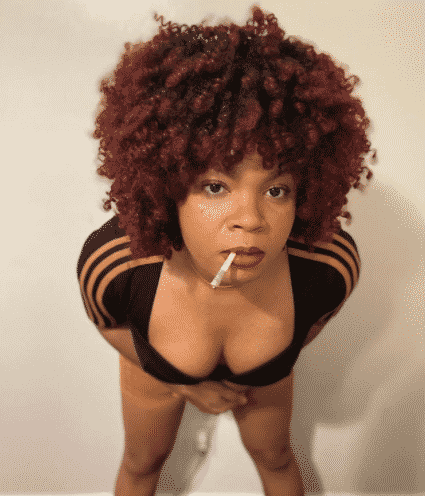 Shonitria Anthony, founder of Blunt Blowin Mama Podcast and Lifestyle Brand, is another advocate for mothers who consume cannabis. Via her Instagram videos, she talks about how “Weed is a breastfeeding mama’s best friend” and encourages having the conversation about what mothers who fear being drug tested at the hospital should do.

“I do strongly believe that all new moms need cannabis,” Anthony says on her Instagram. “I am a firm believer that I would not be doing extended breastfeeding with my two-year-old son without cannabis. Cannabis has only helped us both.”

Canna-moms are assets to women and gender non-conforming people who deal with the many intersections of discrimination and bias as cannabis consumers. Parker and Anthony are two great examples, and so is Dominique, a mom who consumes cannabis to help with her lupus, and Shayla-Marie Anderson, an open canna-mom recently diagnosed with fibromyalgia and rheumatoid arthritis. The impact of those who are open about the positive effects of cannabis during and post pregnancy not only foster community support, they also create hope for the future, according to Parker.

“There are so many women who are willing to be open about [cannabis consumption] and those are the people that I think are going to help curb the stigma that we still experience,” Parker explained. “It gives me so much hope that there will be less women who will have to go through the experience of being afraid that their child may be taken away.”