Cannabis and Pregnancy: A look at where women turn when science and research fails them

Byrdie McCoy’s first pregnancy was easy, but the second was nearly debilitating. From the start, the Portland, Oregon, resident suffered from sciatica, pelvic girdle pain, and intense nausea, which made it nearly impossible to work at her jobs as a bartender and a bootcamp coach.

Her doctor suggested prescription pain and nausea pills that she said would have no side effects.

“I found that hard to believe,” says McCoy, who is now a full-time fitness coach and “whole-listic” lifestyle influencer. She asked her doctor what would happen if her firstborn got ahold of the medications.

“She said I would have to take her to the hospital,” McCoy adds. “So, if this could hurt my 9-year-old, why would I give it to my unborn child?”

Uncomfortable with the medications her doctor was suggesting, McCoy opted to use cannabidiol (CBD) derived from hemp, a non-psychoactive cannabinoid that offers multiple medical applications. She’d only tried a CBD topical once or twice, but she thought it was a better option to relieve her pain and nausea.

“If I was going to take anything, I felt more comfortable taking something that comes from a plant,” she says.

In the United States, legal access to cannabis means more women like McCoy are grappling with whether to consume the plant while pregnant. The percentage of pregnant women in the U.S. self-reporting cannabis use climbed from 3.4% in 2002-2003 to 7% in 2016-2017, according to a study published in June in the Journal of the American Medical Association. Similar information was found in a study released in July examining self-reported use among women in Northern California, finding an increase of cannabis use during pregnancy from 1.95% in 2009 to 3.38% in 2017.

But how can pregnant women considering cannabis as an option detangle the anecdotal and academic information out there and make an educated decision for themselves? And are they even allowed to make that decision without suffering legal repercussions? 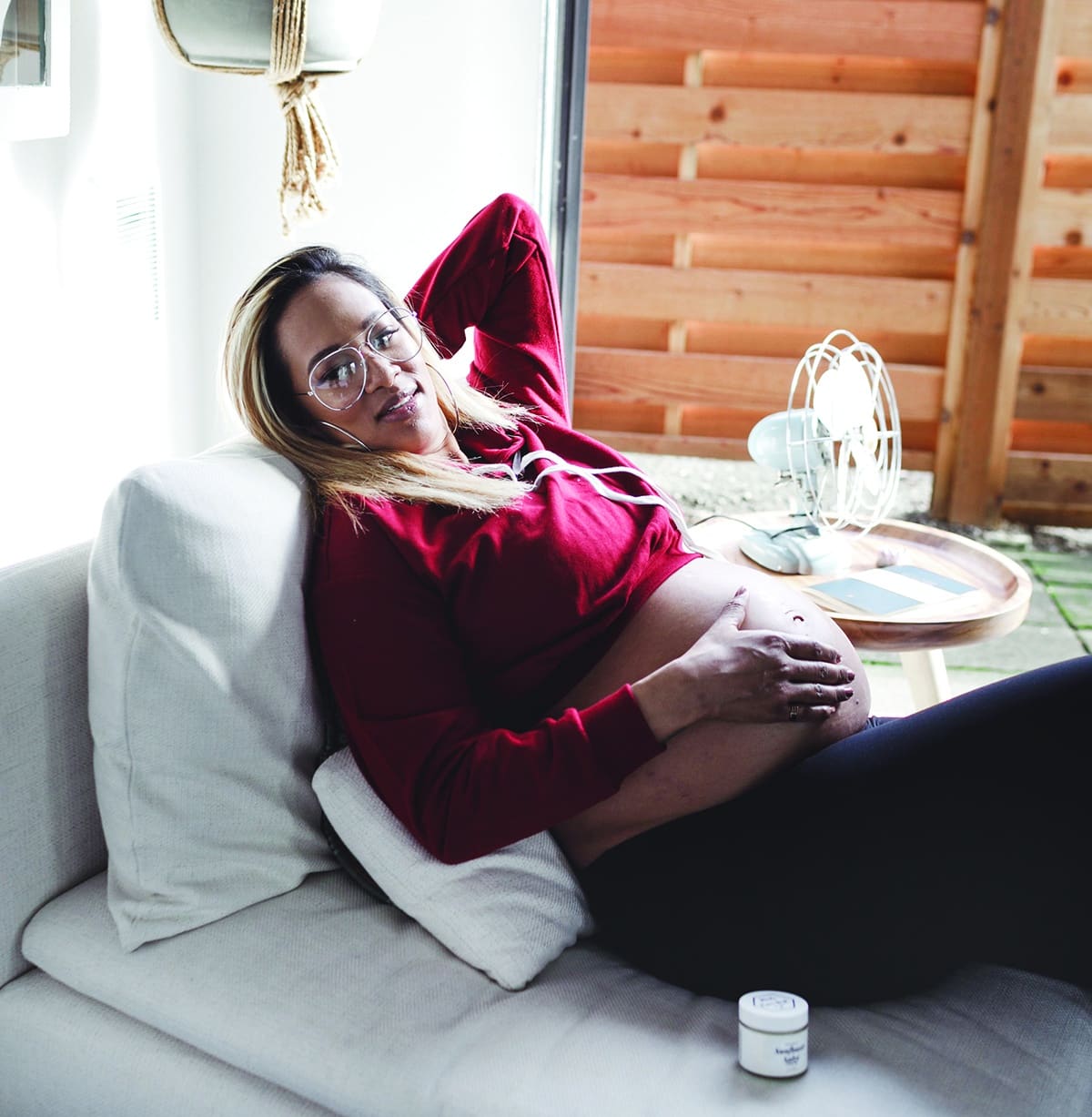 What we (sort of) know

Medical organizations like the American College of Obstetricians and Gynecologists and the American Academy of Pediatrics recommend against cannabis use during a woman’s pregnancy. The National Institute on Drug Abuse also cautions against it but says more research is needed to understand how use could impact infants.

The available studies are conflicting and more research is needed to truly understand the effects of cannabis use during pregnancy, according to Dr. Genester Wilson-King, a Florida-based obstetrician who serves on the board of directors for the Society of Cannabis Clinicians and the Doctors for Cannabis Regulation.

She recently completed a literature review on cannabis use during pregnancy and presented it to the Society of Cannabis Clinicians and the American Medical Marijuana Physicians Association this year. “Most of the existing studies are surveys or retrospective. They mostly rely on self-report,” Wilson-King says, adding that self-reporting has been found to be unreliable in several studies.

A prominent study that cannabis advocates often reference when citing the safety of using cannabis while pregnant was conducted in Jamaica in the late 1960s. Researchers looked at 24 newborns who were exposed to the plant and 20 who were unexposed. Exposed children were found to be less irritable and more alert. But there are some holes in the study that other researchers have indicated.

“It’s a very small sample size. There’s definitely been studies that have been done with many more children that have looked at similar outcomes that haven’t had the same findings,” said Torri Metz, associate professor of maternal-fetal medicine at University of Utah Health, in an article for Undark.org.

The National Academies of Sciences, Engineering and Medicine released a review in 2017 in which it considered more than 10,000 scientific studies about cannabis. The report found a link between mothers who smoke cannabis during pregnancy and babies with lower birth weight. However, the studies reviewed had confounding factors like women using alcohol, smoking cigarettes, and smoking cannabis, as opposed to ingesting the plant in other forms.

“There are many studies that demonstrate conflicting information and nothing conclusive,” Wilson-King says.

When talking to her patients about cannabis during pregnancy, Wilson-King counsels them on the available studies and potential health issues. She tries to offer a cannabis alternative if one is available and looks at the patient’s diet and lifestyle habits.

“Pregnancy is not the time for patients to use cannabis simply for enjoyment,” she says. “I would counsel the patient on the risks of using any drug, medicine, or plant during pregnancy. We would weigh the benefits and the risks and make the decision together.”

If the patient is committed to using marijuana during their pregnancy, Wilson-King encourages the use of CBD topicals and sprays because they’re not absorbed into the bloodstream.

With cannabis use among pregnant women rising, questions around the plant’s safety are only going to grow. More research is in progress, albeit limited.

In March 2020, the Drug Enforcement Administration and the Department of Justice announced action to further expand opportunities for scientific and medical research on cannabis in the U.S.

The National Institute on Drug Abuse is also funding four studies on marijuana use during pregnancy, including one at the University of Washington that is underway. A study published in February 2020 by the Reproductive Health Journal found that the use of cannabis among pregnant women is frequent, and prenatal exposure may be associated with affective symptoms and ADHD.

With more potential findings on the horizon, women considering cannabis as an option during pregnancy could one day have more answers than questions. 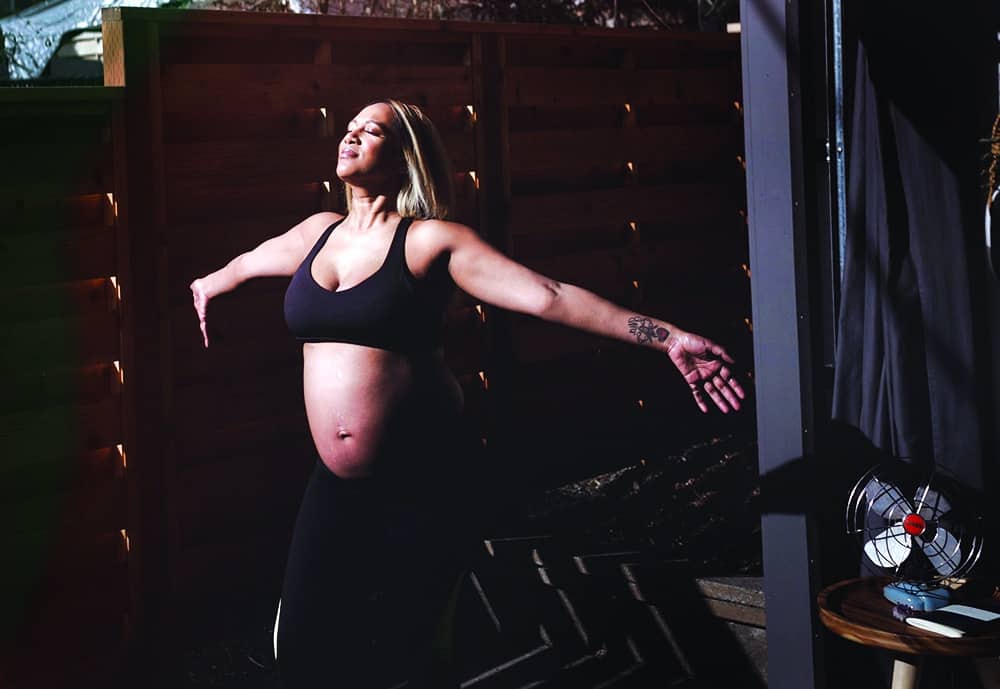 The legal side of cannabis use during pregnancy

Potential health risks aren’t the only factor to look at when considering using cannabis during pregnancy. If a woman is found by health care professionals to be using marijuana while pregnant, she’s at risk of having that put on her record, getting arrested, being charged with a felony, or even having her child taken away.

Heather Thompson, the deputy director of Elephant Circle, a birth justice organization based in Colorado, says pregnant women have to be prepared to submit to drug screenings when they go to the hospital. If a woman declines to be drug tested, she says, “it could raise the radar enough” that her baby gets tested.

“That raises a whole set of circumstances depending on the state you’re in,” Thompson says.

There are some important factors to consider if a woman plans to use cannabis during pregnancy. She should look at the laws in her state and county, as well as the policy on cannabis use during pregnancy at the hospital she plans to give birth in. If she’s a person of color or on Medicaid, it could affect her trajectory, according to Thompson.

“People on Medicaid are monitored more closely by the government than people who are not,” Thompson says. Things like missing doctors appointments toward the end of pregnancy can create suspicion among health care providers.

To find out more about the rights of pregnant women and the laws in your state, Sweet Jane suggests the following resources:

-How States Handle Drug Use During Pregnancy

Another potential risk for pregnant women to consider when using cannabis is a legal one. In many states, women can face criminal charges and even lose their child if they or their baby test positive for any form of cannabis. A 2013 study by the National Advocates for Pregnant Women found that African-American women were significantly more likely to be arrested, reported to state authorities by hospital staff, and subjected to felony charges for cannabis use.

When McCoy, who is African-American, told her OBGYN she was considering using CBD, the doctor told her she would be drug tested. She thought this warning was strange since isolate CBD, when used without THC, doesn’t show up on a drug test. McCoy still opted to use CBD, putting tinctures under her tongue and in her drinks daily, as well as topicals. The CBD made her nausea disappear and her pain decrease.

“CBD let me work, be social with people, walk and talk; it changed my life,” says McCoy.

The day McCoy went into labor, nearly every health professional who viewed her health record told her she would be drug tested.

“Their concern wasn’t about me and my pain, it was about me using CBD,” she says. “Even though I knew CBD wasn’t going to pop up on a drug test, they said it so many times I was nervous that it might and that they would try and take my son away from me.”

The day of her son’s birth brought mixed emotions. Immediately after he was born, they took urine and stool samples to see if he had cannabis in his system. “After that I never heard anything about it. No one said anything,” she says.

McCoy’s experience is one of the reasons she’s a cannabis advocate today.

“A lot of that treatment had to do with the fact that I am black,” she says. “That wouldn’t have happened to a white woman at the end of the day.”

Through her fitness coaching, social media influence, and talks on mental health and pregnancy, McCoy tries to remove some of the stigma black women and mothers face when using cannabis.