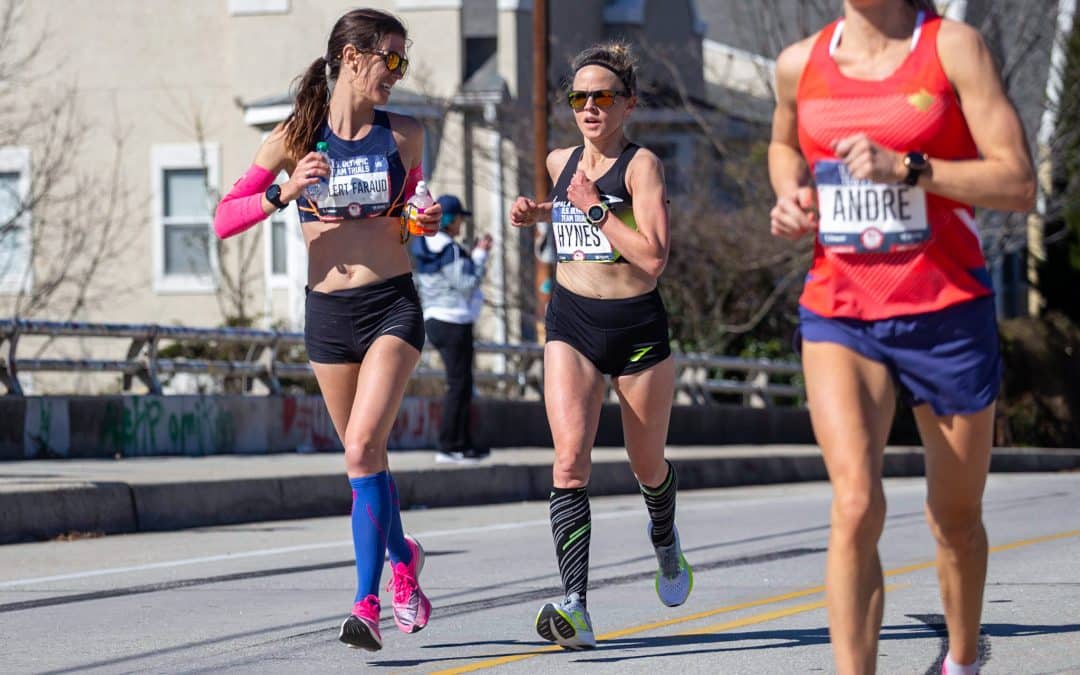 Katie Hynes toed the line at Grandma’s Marathon in June, knowing she was in the best shape of her life. A few months shy of her 40th birthday, she’d just run a 34-minute 10K and was averaging 70 miles per week, mostly in San Francisco’s Golden Gate State Park.

At the gun, she settled into a rhythm with a pack of other women. Her close friend and longtime training partner Kir Faraud, 34, started with the pros and was a little farther ahead. As they cruised down Highway 61 from Two Harbors, Minnesota, all the way to Duluth, they ticked off steady six-minute miles. Hynes finished in 2 hours, 39 minutes, and Faraud in 2 hours, 36 minutes, fast enough to qualify for her second Olympic Trials Marathon. They placed 28th and 14th, respectively, among some of the fastest women in the world.

After the race, Faraud and Hynes shared a joint back at their hotel. For years, cannabis has played a central role in both of their training regimens—and they’re not alone. As recreational cannabis use becomes legal in states across the U.S., athletes are discovering the plant’s ability to ease pain and inflammation, aid sleep, and calm nerves. 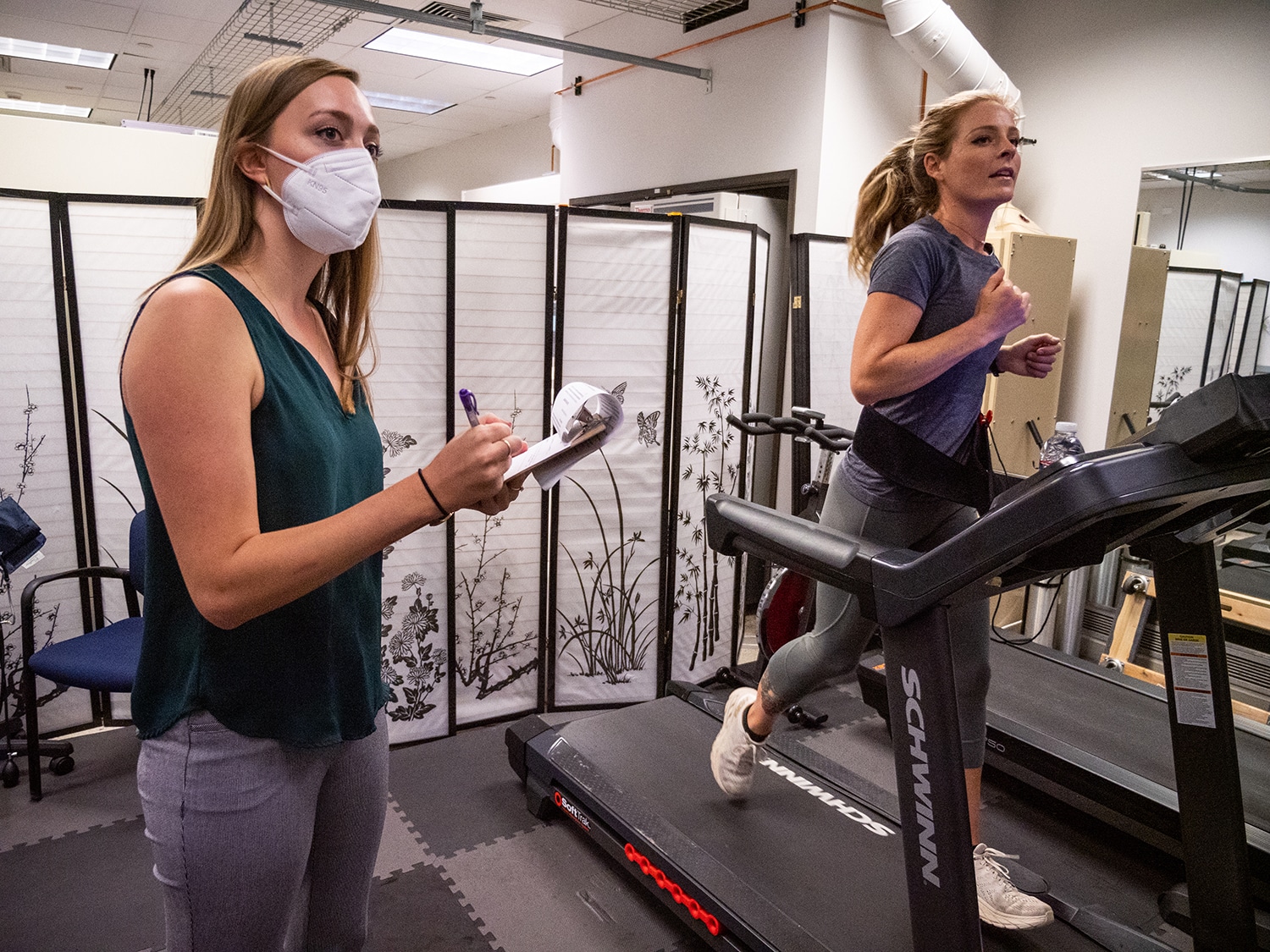 Angela Bryan, Ph.D., a professor of psychology and neuroscience at the University of Colorado, and graduate research fellow Laurel Gibson conduct research on cannabis use among competitive runners like Hynes and Faraud but also more casual athletes. They say that while we’re still at the early stages of understanding how cannabis affects athletic activity, the data suggests a positive correlation—but not as a performance-enhancer, despite the World Anti-Doping Agency’s 23-year ban on THC at sanctioned road and track races.

“We can pretty confidently say that from the standpoint of exercise performance and speed and strength, things like that, cannabis probably isn’t helping much,” Gibson says. But it does appear to increase enjoyment and motivation, which could significantly lower the barrier of entry for people who want to run but find it, more often than not, a chore. “We’re interested in how we can get people who aren’t active, or who aren’t like these superstar athletes, to engage in more physical activity.”

Gibson became curious about cannabis and exercise when she moved to Colorado from Connecticut in 2018 and noticed that a lot of people were getting high before they went skiing, hiking, or running.

“I had really never been exposed to that before,” she says, noting that it contradicts the stereotypical image of a cannabis user as “lazy and not wanting to do anything.” No one exemplifies this contradiction more than Heather Mashhoodi, a champion ultra-marathoner who told Gibson that she often takes an edible during her 50-mile training runs to help pass the time, “like a reward halfway through.”

Faraud sometimes takes an edible for her weekly 20-miler. She likes the sense of well-being it brings but also the unexpected turns.

“Sometimes you can be fine and sometimes you take a dose and you’re fucked,” she says, recalling a run where she had to stop midway because she could barely move. “But, to me, that’s like the marathon, where you’re gonna be hit with something; something’s gonna come and you need to figure out how to navigate it, get your head through it.”

Faraud, who studied neuroscience in college, says her interests in cannabis and running both stem from an innate curiosity about controlling her own mind while also respecting her body’s limits.

“Sometimes I’m, like, splitting my mind in a way that I’m visualizing scenes, or pretending I’m running a race that’s to come, or just going through my head about things I’ve experienced,” she says.

Faraud says that dissociative effect reinforces for her the idea that running is largely mental—that “if you tell yourself that you can do something, your body will follow.” In this sense, she says, cannabis can feed the “self-belief you need as an athlete.”

For novice consumers or people who have never combined running and cannabis, the potentially adverse effects of THC—dissociation, anxiety, and paranoia—as well as rare physiological responses to other cannabinoids, such as heart arrhythmia and stroke, warrant a cautionary approach.

Mike Sandoval, a drug delivery scientist with expertise in nanotechnology, says that microdosing THC—even as little as 150 micrograms (0.15mg)—can reap the benefits of the compound. For now, Sandoval uses only federally compliant hemp extracts at his Austin-based firm, Santé Laboratories, but sees significant potential for low doses of THC in future products. With more than 100 cannabinoids to work with, he describes the process as composing a symphony.

“With multiple instruments from multiple backgrounds, you can create this really unique experience,” he says, and each combination will produce a different effect.

Ty Haney, a longtime runner and cannabis user, known for founding the athleisure apparel brand Outdoor Voices, works with Santé Laboratories to produce a line of cannabinoid-infused gummies, tinctures, and balms called Joggy, which she launched in April with the belief that such supplements represent a new frontier in running.

“I think it unlocks, or has the potential to unlock, happiness for people,” she says. Haney conceived of Joggy after research debunked the idea that endorphins caused the so-called “runner’s high,” that feeling of euphoria experienced athletes rave about but often eludes beginners. We now know that endorphins cannot cross the blood-brain barrier, suggesting that the runner’s high is actually a product of our natural endocannabinoid system, believed to regulate numerous physiological and cognitive processes, as well as to mediate the effects of cannabis.

“I kind of view Joggy as developing into the replacement for Red Bull,” she says. “And that might seem a little strange, but it’s really going to be a leader in plant-based energy products.”

Anecdotal evidence suggests that Haney is onto something, but the science is still a little murky. Gibson says that using cannabis might tap into our endocannabinoid system, making the runner’s high attainable for just about anyone, or it might interfere with it.

“We need a lot more research to figure out what is actually going on,” she says.

Given the federal laws that continue to limit cannabis research, this applies to Sandoval’s work as well.

As psychologists, Bryan and Gibson are guided by broader and more subjective questions: Why, as their data indicates, are more men inclined to run high than women —perhaps a reflection of women feeling the need to be more on guard as they’re out running? How does cannabis impact an athlete’s experience in a highly controlled lab setting versus a natural one, like a mountain trail? Does disproportionate policing of Black and brown communities influence their comfort with combining cannabis and exercise?

“Starting to get that evidence so people can make an informed decision of whether or not this is a behavior they want to try is really critical,” Gibson says.

In the meantime, plenty of runners are happy to experiment on their own. Hynes, who works as a dietician, prefers not to take cannabis before a run but finds that it helps with her post-run GI distress and anxiety. These days, Hynes leans more toward smoking, “because you get different parts of the plant” than you would from ingesting it. But she also makes her own vegan edibles for friends and family, and advises starting with lower doses “because you’re gonna have a quicker and higher uptake” if you haven’t built up a tolerance. And, she’s quick to note, “lower” is relative: 20mg of THC for one person could have the same effect as 5mg for someone else.

“Start small and then go higher,” she says. 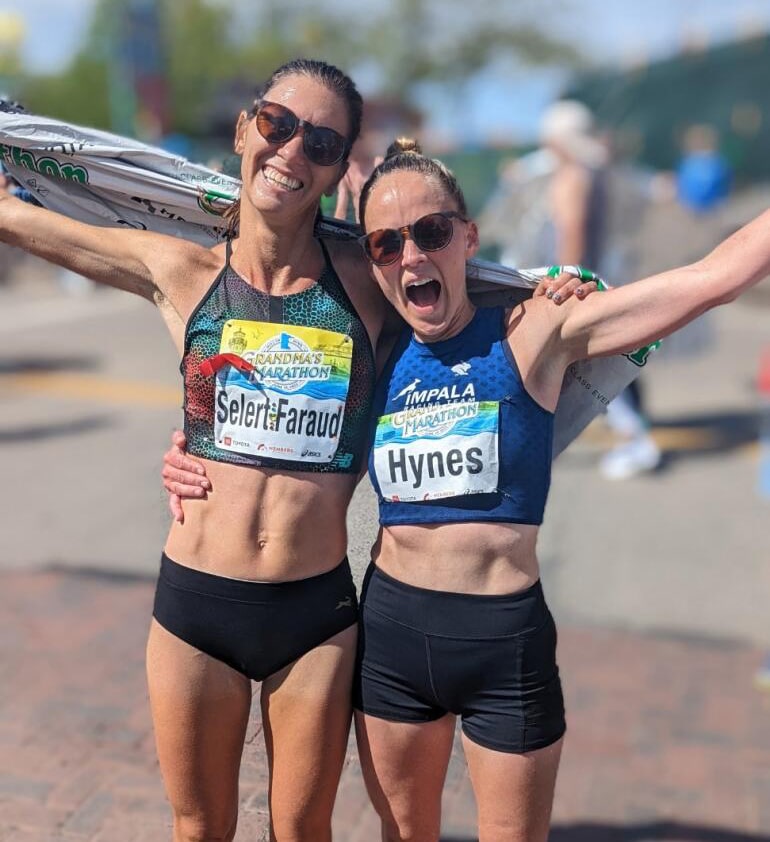 Hynes and Faraud met again the last week of August at Hood to Coast, a 200-mile relay from Mount Hood to Seaside, Oregon. They stayed up all night with teams of 12 runners, covering between 15 and 20 miles each, continuing a friendly rivalry that dates back more than a decade.

At the finish, they found each other on the beach, just as they have at almost every Hood to Coast since 2014. As thousands of other runners stood in line for beer and food, Hynes and Faraud looked out at the Pacific Ocean, its early morning waves lapping gently at the shore, and shared a joint.

For Hynes and Faraud, it’s all of a piece.

“Life is hard,” Faraud says. “There’s a lot of shit out there, and we’re all fighting our own battles. But we’re stuck here, so we might as well enjoy what we’re doing.” 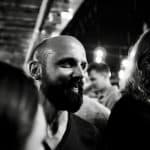 David Alm has written for GQ, Mother Jones, Runner's World, The Daily Beast, Forbes, Women's Running, and numerous other publications. His 2022 profile of Thai Richards, the founder of a cannabis-focused run club in Brooklyn, made the covers of the U.S. and UK editions of Runner's World; that piece and others have also been included in best-of-week and best-of-year lists at Longreads. He lives in Brooklyn and teaches journalism at Hunter College.

This author does not have any more posts.