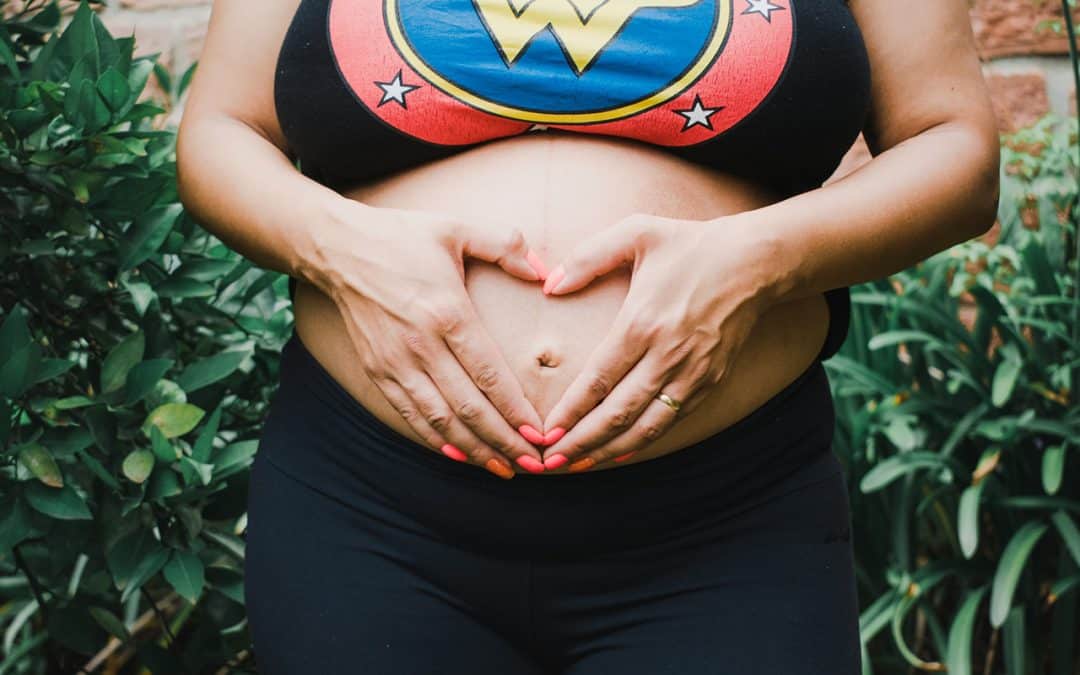 A personal Essay on Mental Health, Pregnancy, and Cannabis

When I found out I was pregnant last fall, I immediately stopped medicating with cannabis, as I had done in my first pregnancy years earlier. Before the first one, which was in 2013, I’d been partaking a few times weekly in what I saw as a purely recreational way I therefore stood to reason that, like alcohol, tobacco, and caffeine, I should abstain from cannabis due to the largely unknown effects of THC on a fetus. I am a big believer in following the rules; and Health Canada allowed no argument on the matter of cannabis and pregnancy, despite the incomplete and poorly acquired data upon which they were basing their judgement.

That said, many things have changed in the years since my first pregnancy.

I suffered from untreated postpartum depression, which allowed the emergence of OCD traits, specifically relating to the care of my daughter. Most problematic of all was that I had an experience that triggered a deep-seated trauma response relating to some very old wounds. I began dissociating and losing chunks of time. I didn’t sleep. My senses were perpetually on high-alert, and I had regular panic attacks.

On one such occasion, convinced of my imminent death, I went to the hospital,where I was mistakenly diagnosed with bipolar disorder and unnecessarily prescribed dozens of drugs ranging from antipsychotics to benzodiazepines (and everything in between) for 3 years.

On my third and final hospitalization in that time, a new doctor ordered extensive testing and discovered the error. I was not bipolar. I suffered from complex PTSD.

She weaned me off all pharmaceuticals (which hadn’t worked anyway and, frankly, made the situation far worse with their side effects), and scheduled me for weekly therapy. She also saw value in, and supported, regular cannabis consumption to treat my symptoms.

Would you be surprised to hear that suddenly, the severity of my symptoms diminished?

I bonded with my now 4 year old daughter. I reengaged in life, and slowly, over time, began to feel whole again. My first doctor convinced my husband and I that we should never, ever, consider having more children because of my inability to “handle it.” But we now felt confident we could resume our original plans for our family. After many, many conversations on the matter, we decided to try for another baby. 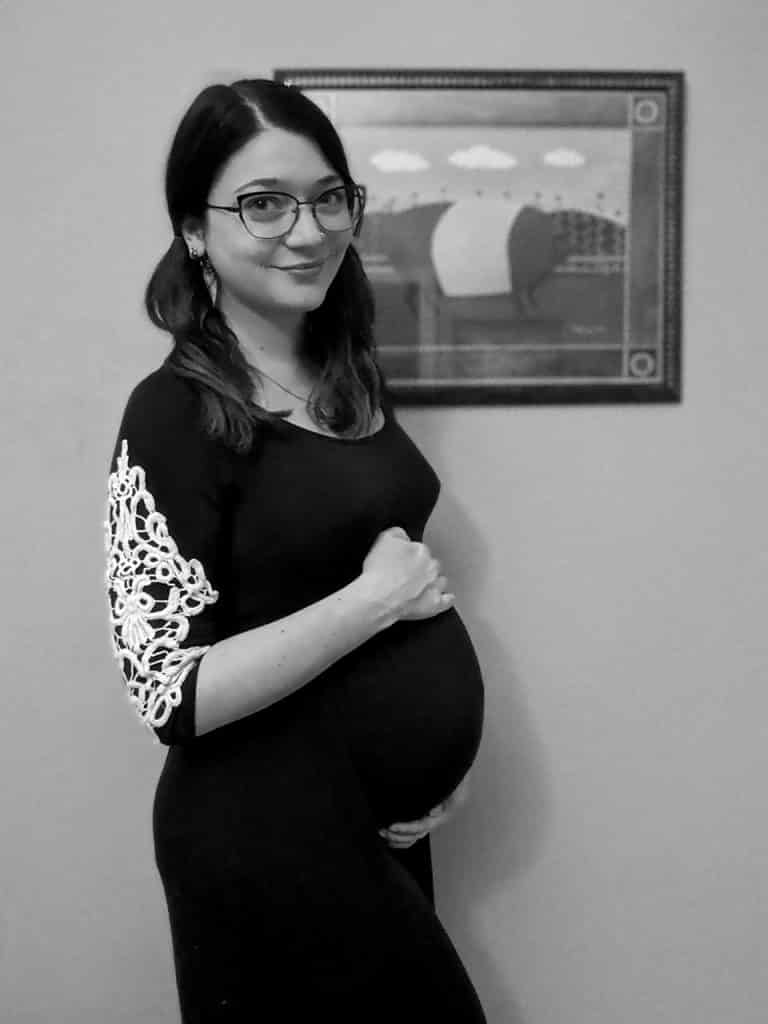 When I realized I was pregnant a second time, my knee-jerk reaction was to stop my now mainly medical cannabis consumption. My husband, very much against the self-deprivation strategy I’d undertaken, watched warily over the weeks as I stopped eating and sleeping with any regularity. He  witnessed the return of my dissociation, hypervigilance, and intrusive thoughts, not to mention the 24-hour vomiting that came along with early pregnancy.

We sat down and discussed it together; we consulted my psychiatrist and my midwife. I even asked the one person I’ve always known to have very few positive thoughts about the cannabis plant–my mother.

My psychiatrist, hands bound by regulations, could only state that studies show babies born to mothers who consume cannabis have a lower birth weight; and that some claim behavioural and cognitive issues as they mature. She then made a point of noting that none of these studies controlled for other substances, such as alcohol or tobacco; and they relied solely on self-reporting.

I was offered what was in her power to prescribe during pregnancy: benzodiazepines, a class C drug known to cause cleft palate if taken in the first trimester, and possible physical addiction in the infant if used in the third trimester. I refused it. I also refused the option to start a new regimen of the same drugs that had previously proved ineffective. Nabilone (synthetic THC) was then put on the table. It had the same effects and contraindications as the actual cannabis plant, but without the benefit of being a plant I grew myself.

My midwife, after listening to an abbreviated version of my medical history and my two-year cannabis journey, immediately supported my continued use through pregnancy. She stated that, anecdotally, it was not that uncommon, and the benefits in my case clearly outweighed the risks, although she had personally not seen any difference in infants born to mothers who used cannabis in their pregnancy versus those who had abstained. She made some practical suggestions to reduce frequency when possible, and to rely on healthier methods of consumption (in my case, this meant only vaping, and only flower from a vetted source).

I resumed vaping through the fall and winter, historically bad periods for me. I then finally addressed my renewed consumption with my mother, knowing that her mentality of “reefer madness” would provide me a decisively alternate point of view, if it was warranted. I sent her articles, statistics, any and all information I could gather from legitimate sources.

When I tried to explain to her the details of my particular situation, and how the benefits weighed against the risks, she didn’t even let me finish–she immediately gave me her unwavering support.

I had somehow forgotten that she had seen me “medicated up to the eyeballs” (her words) on various pharmaceuticals. She’d witnessed the awful side effects they caused, with no tangible improvement in my symptoms. She’d also seen me medicating with cannabis, and how it had allowed me to re-engage in my own life. She told me to trust my motherly instincts, and that when she listened to hers on the matter, the choice for me to continue to medicate was clearly the correct one. Her one caveat: Keep it to myself.

Could it be that my (previously) ardently anti-cannabis mother’s only remaining concern was for public perception? Of how I would be treated in the hospital when my baby was born? Defying all logic, would I be judged unfit because I turned down ineffective pharmaceuticals in favor of a much simpler, effective natural medication? How can it be that my greatest concern in pregnancy, and my sole remaining stressor, is whether or not I paint myself a target for choosing the best and least harmful way to manage my PTSD through this time?

I learned much about advocating for myself as a patient during my three ‘lost’ years. But despite cannabis’ federally legal status in Canada, I am left with the glaring question: is this even a choice I am permitted to make?

If I had found an effective antidepressant, the conversation would revolve around maternal mental health, which we can all agree is crucial to the health of the baby. Yet here I am, forced to apprehensively wonder: Will I be judged unfit because the medication that works for me is cannabis and not a pill?

The main reasons for my continued consumption revolve around mood (anxiety) and sleep (nightmares). The adjustments I’ve made to my medication regimen therefore are intended to address these two issues. Unless my struggles bleed into other parts of my day, I vape in the evening and before bed, usually to the tune of less than half a gram a day and a sublingual CBD three times a day, morning, noon, night.

I have discovered that pregnancy reduced my tolerance significantly. I can’t even imagine what an entire joint or bong hit would do to me now, let alone a dab. My own physiology guides me to stay within my threshold.

I have struggled with disordered eating for years. I still do. But cannabis allows me to not immediately overrule my cravings. I also make smarter food choices because I’m not held hostage to what my nausea permits me to eat. The baby loves bananas, the texture of which generally repulses me, but after I vape, I can tolerate it. The baby also loves salad, particularly the tomatoes (just like his big sister did years ago). Essentially, I can listen to what my body needs without the compulsion to control or deny my appetite.

Settling in with my family on a night is now my favorite thing. After a while, those kicks can be sore and inconvenient, but that’s not the case once I’ve medicated. The awe persists, and I don’t hesitate to share it with my husband and daughter. I don’t bemoan the discomfort. I lay with my hands on my belly and imagine my son in there. Happiness ensues.

The aches and pains of pregnancy (particularly the dreaded Pelvic Girdle Pain) are made manageable for me with cannabis. I have regained some mobility and can now go for walks in the fresh air,which is crucial to my mental health, and good for the baby, too. Though I have to say that when he sits low, I do still visibly waddle. C’est la vie.

I love my body. I don’t obsess over my weight gain, and can easily laugh off people who ask me–repeatedly–if I’m having twins. Last time I was pregnant, I was obsessed with my appearance (I had high blood pressure and LOTS of swelling) and rarely wanted to be seen in public. This time, I can’t tell you the number of “bumpies” I’ve taken. I’ve even put on a bikini and gone swimming in a public pool.

I sleep. Yes, I wake in the night due to pain and having to pee 75 times, but for the most part, I’m not waking up in a panic because of nightmares and I’m able to settle again afterward. I don’t need to take as many naps during the day as I did last time I was pregnant, because I am getting the rest I need at night.

Most of all, I feel overall happiness with no worry to interfere with it.

There will always be sources of stress in life, particularly in pregnancy, particularly with a worldwide pandemic in full swing. But now I know why some women love pregnancy and the ephemeral feeling of feminine power it imbues you with.

I can think about my pregnancy without anxiety for the future. I can be in the moment, and I can be mindful. And to my delight, I can share these feelings unconcernedly with my family so that we can all enjoy this experience together. 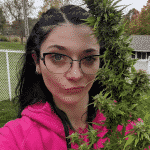 Jo is a cannabis advocate in Ontario, Canada. Though she is a medical consumer, she remains passionate about erasing stigmas for all those who enjoy cannabis. Follow here on IG at: @the_lettucelady