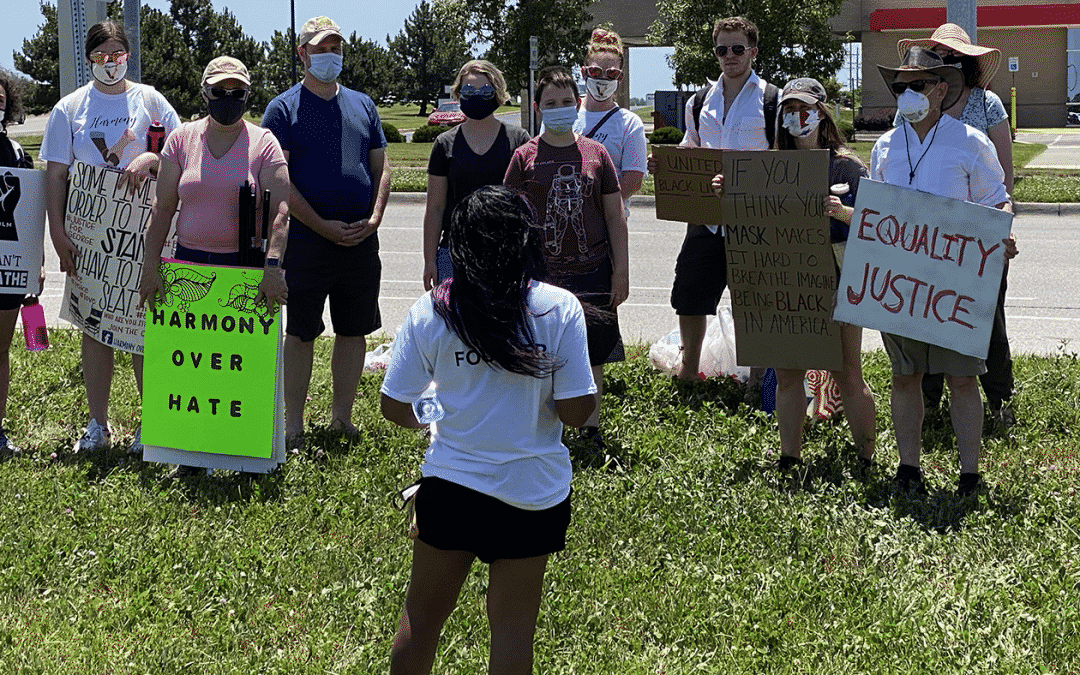 Harmony Over Hate Welcomes All for Peaceful Protest in Kansas City

On Saturday, June 13 about 20-25 peaceful protesters lined a busy thoroughfare in the area that runs east and west underneath Interstate 29.

The protest was organized by Harmony Over Hate, an emerging group founded by Jessica Fulghem-Jarmon and Alicia Cochran; two friends who saw an opportunity to unite people of diverse backgrounds. The organization acknowledges that people who look different from each other can engage in respectful conversations to give all deeper insight. The grassroots growth of the organization, which grew to over 1,300 followers on Facebook in just a month, is quickly gaining support. The founders are currently working on obtaining non-profit status so  they can expand the mission to include diversity training for adults and children around the metro area.

When we arrive at this mid-day protest, cars are passing by honking their horns, people are dropping off water and sunscreen. Generally everything appears calm.

Because of increased safety at protests across the U.S., Fulghem-Jarmon informed the retail locations near the protest and the Kansas City Police Department of her plans. In both cases she was met with support. Still, that didn’t stop the protesters from having a tense moment when they learned a passing pedestrian who engaged with protesters was seen with a concealed weapon magazine (concealed and carry personal firearms are allowed in Missouri without a permit).

I asked Fulghem-Jarmon why she organized the protest as she reflects on the moment.

“To stop the biased judgment, to stop the blindness. Like we were trying to tell that gentleman, unfortunately there are some people that are blind to racism, and that’s why we’re here, to help them see,” she says. ‘We are here to stand as one, we’re here to stand together and to support each other. It takes work and not everybody is the same. Unfortunately he wasn’t understanding that not everybody is the same. He kept saying, ‘We’re all American.’ You are absolutely right. But not everybody sees it that way.”

She acknowledges that at this protest, she is the minority. According to the US Census Bureau’s 2018 American Community Survey data, Black and African-American residents make up 12% of the Kansas City metro’s 2.1 million population. This doesn’t stop her, and it doesn’t stop area residents from joining, listening, and following her.

We visited with some of them. 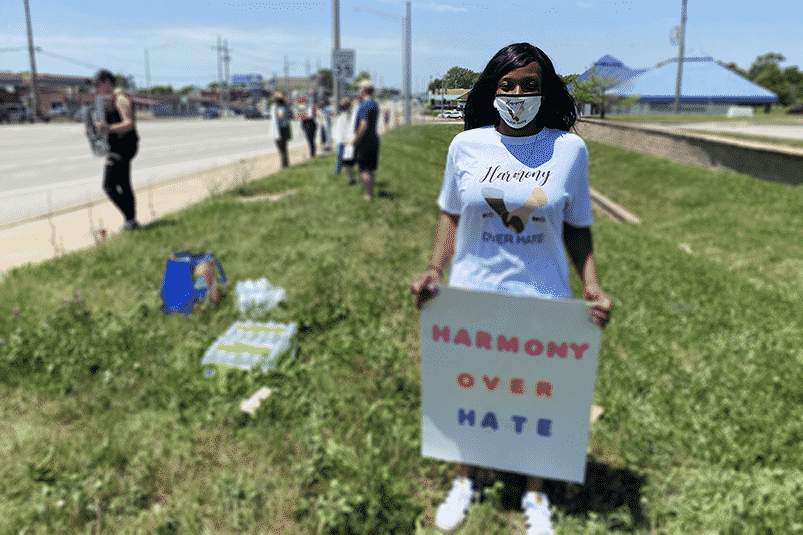 It’s the heart’s there. I just want to help people. I’ve always wanted to advocate for others. And I thought it was just in the healthcare field because I’m medical too, but it’s not just that–it’s just period. I just want to give love and have it in return.

It makes me feel extremely happy just because people are willing to overlook what some are only focusing on, which is, you know, color and not wanting to stand by, or not wanting to stand up for something. Right is right and wrong is wrong–period. So what ended up happening [with George Flyod] was wrong and what has happened unfortunately in the past, and has repeated itself, has been wrong. So having all these people stand up here. … to see that all these people out here support … it doesn’t get any better than that. Like it just doesn’t.

Kerstin & Katherine, along with their daughters

White people can’t be silent anymore. We need to step up and support a change, systemic change. Things have gone on for too long and it’s going to change in this generation right before our eyes. We can be a part of that. … This is actually our annual Girls’ Day! This year, we decided to incorporate an aspect of social justice. … I feel like I’m not doing enough. I feel like I’m never doing enough.

I feel like they need to learn at a young age that it’s not just enough to acknowledge your white privilege. You have to use your privilege to propel social justice and change. 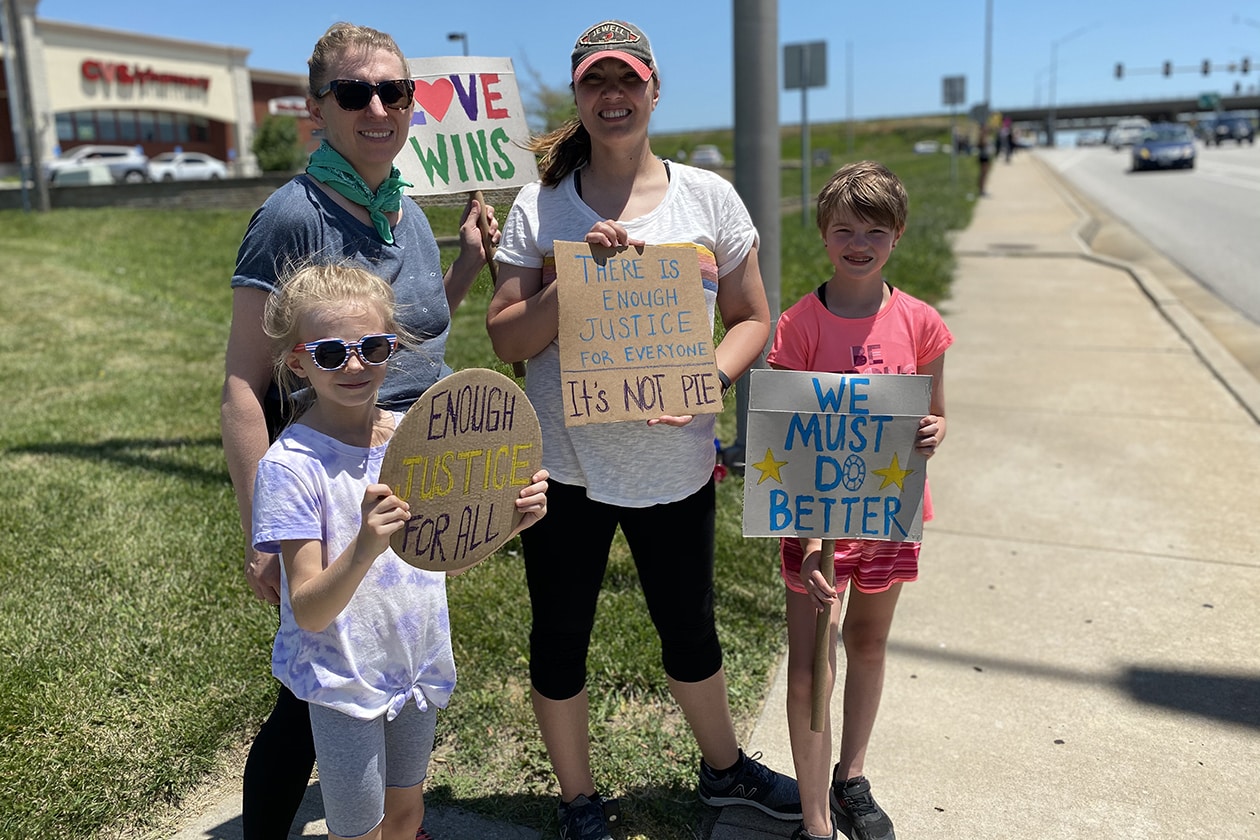 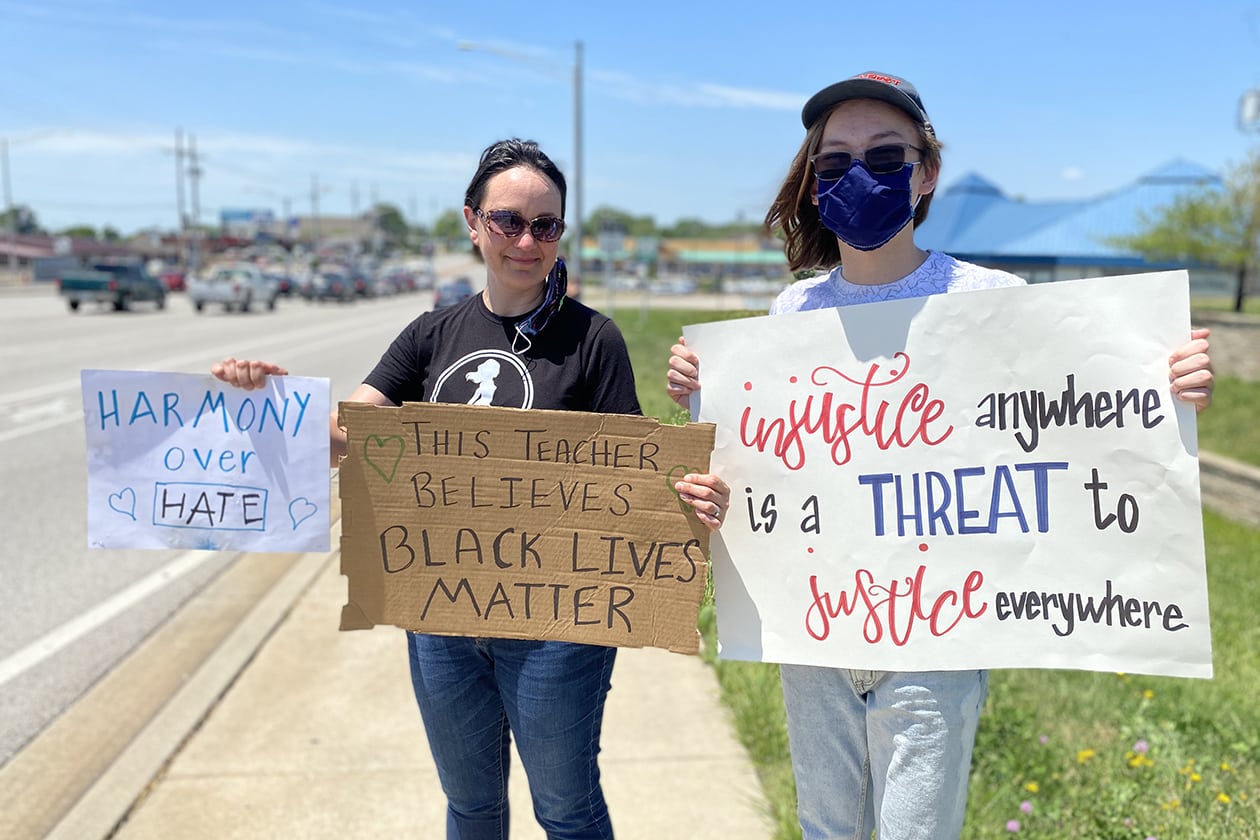 I think it’s important to stand up and to use our privilege, to make it known that what we believe in, that black lives matter, that things need to change.

I am out here because I don’t care about the fact that other people have different colored skin. If they’re all humans then they should all be treated equally, we should all be treated equally. We need to put out the fire in the burning house, and not focus on all lives matter right now, because they do, but we need to focus on the burning house rather than the one that is perfectly fine.

Honestly, for me … watching all this happen, it’s like, you’re looking back in the history books and if this was the sixties do I want to look back and just say, “I sat at home and didn’t do anything?” No. I want to push and be a part of the movement. There’s a lot of things that are wrong with our society and I think one of the things I’ve learned being out here, just like hearing so many people honk is there are so many people who agree with it. And up until this point, a lot of people didn’t think there was a need to speak out or a need to address it. You know? A lot of us can get through it and you see something terrible in the news and it’s all, man, that’s bad. And then it’s gone the next day. So I’m not glad that our society is at this point, but I think it was inevitable. There’s been so many issues that have not been addressed at all, or addressed and not fixed. So it’s, I mean, it comes to a breaking point. 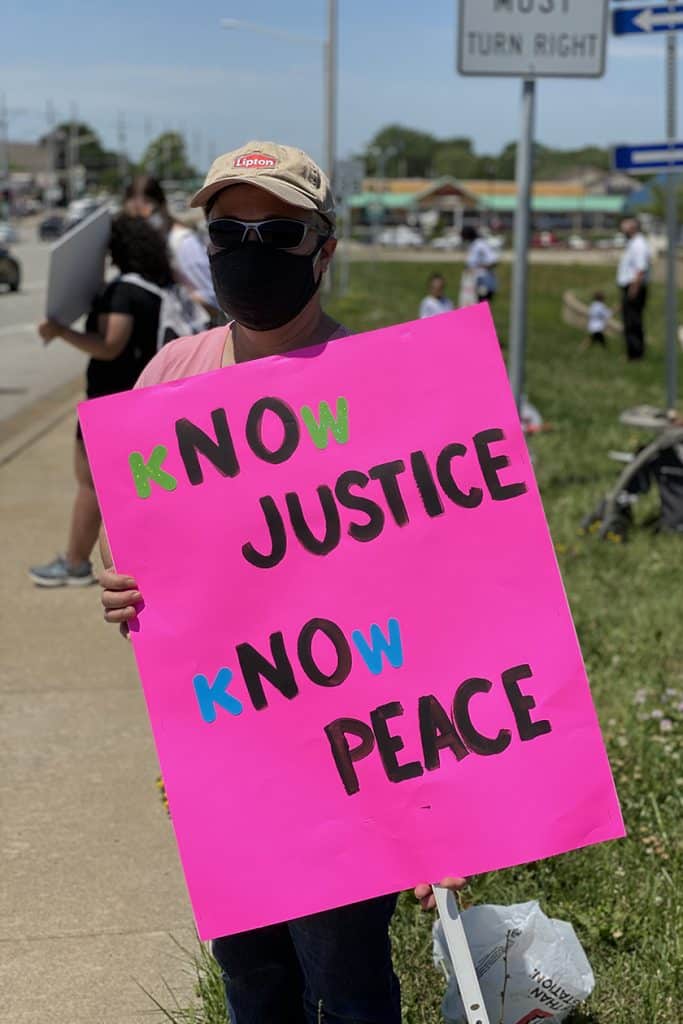 We’ll continue to highlight the powerful work of peaceful protests through your words, amplifying the voices of black women, and their advocates, in an effort to share the Black Lives Matter movement as far as possible.

If you have a story to share, email us at hello@sweetjanemag.com.