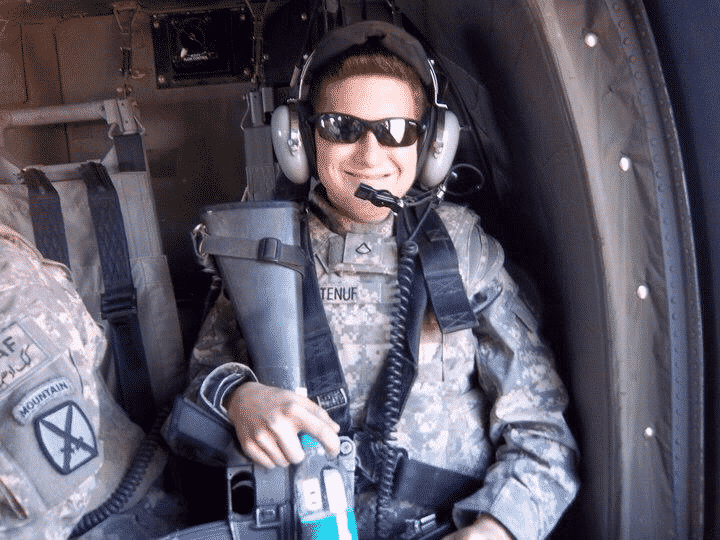 Profile on the Founder of Veteran’s Ananda Inc. & Ananda Farms

After serving as an Apache crew chief for four years in the U.S. Army, including one deployment to Afghanistan, Stenuf was medically retired due to a diagnosis of epilepsy from a traumatic brain injury and the early stages of PTSD.

The time after her service was dark. In and out of rehabilitation facilities, Stenuf overmedicated on prescription drugs, self-medicated with drugs and alcohol, and attempted suicide—twice.

“I felt no purpose. I didn’t have a passion. I didn’t have meaning. Feelings were distant to me, unless it was that of anger, which is a secondary emotion,” says Stenuf. “I just kind of lost touch with myself.”

When Stenuf finally smoked a joint during her downward spiral, she mocked the act as a high school activity that would give her munchies. But what it actually gave her was the ability to leave the house without PTSD and post-service symptoms. For the first time in a long time, Stenuf and her wife had hope for the future.

Not taking the plant for granted, Stenuf learned how cannabis best worked for her by studying her body and the plant; she slowly eliminated all of her 13 prescription drugs and today is epilepsy free. The life-altering effects of cannabis also allowed her clarity to create Veteran’s Ananda and Ananda Farms, a DEA-licensed hemp cultivating and processing company, to help others.

The upstate New York nonprofit offers traditional and non-traditional therapies to U.S. Armed Service members, veterans, and first responders to help them support, heal, and rehabilitate for happy, productive, and fulfilling lives. At 22 acres, Ananda Farms serves as an agricultural training and development center for veterans and first responders, participants receive agro-cognitive therapies while finding their niche in agriculture.

“We kind of stepped back and created this new model of health care because we want our team of credible professionals to serve those who have served in the [armed] forces with compassion and dedication,” says Stenuf. “I’m a wholehearted believer of post-traumatic stress disorder, but I think there’s a way to take the D out of that equation to make it post-traumatic stress and not have this stress ‘labeled’ as a disorder. This is done through healthy management of our social and psychological issues.”

Stenuf and her team of military mentors provide healing in a rural setting that offers fishing, farming, horseback riding, and camping with plenty of space to be free; these are known as post-traumatic growth treatments. Veterans working with veterans creates a connection of trust and gives participants an opportunity to be relaxed, as they can trust their mentor will have their back and can relate to their experiences.

“I don’t think anybody would disagree with me when I say that’s the key component of the healing process in itself—make sure you’re in a serene, welcome, calm, loving environment that truly gives you that chance to be vulnerable, to be weak, to be free, to be able to take a breath in, let it all go, and be part of the healing process,” she says.