Black Voices from the Plummer Park Protests in Hollywood 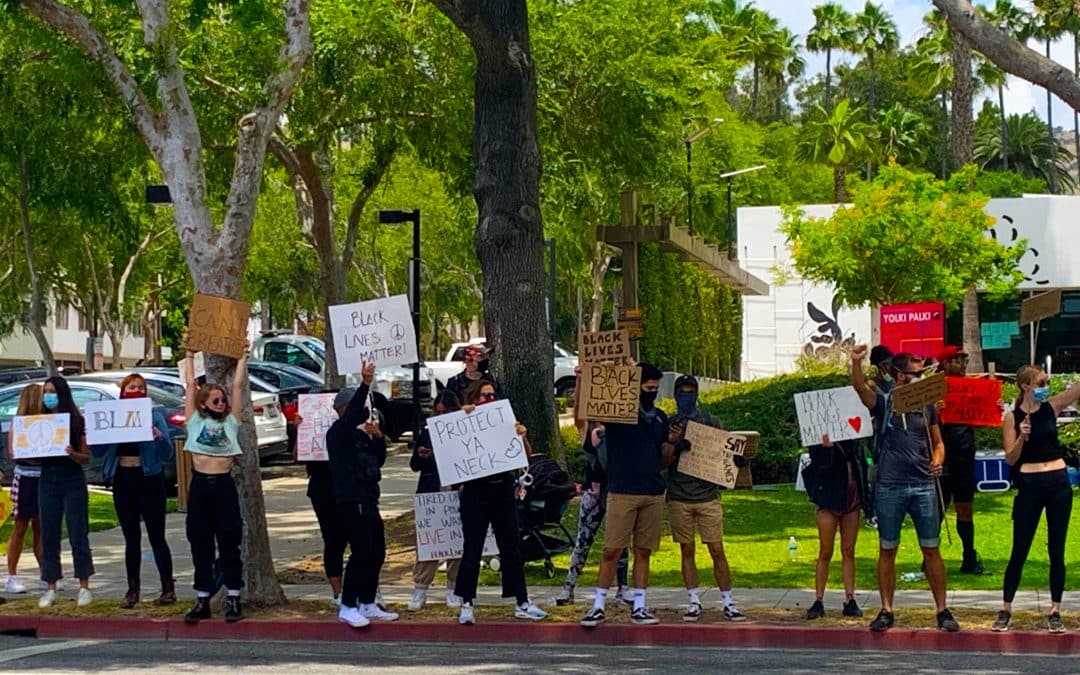 “I wanted to take this opportunity to teach my daughter where we’ve come from, where we are now. This is not a color issue, it’s a human rights issue,” said Kimberly Lawson at the Plummer Park Protests on June 6 in Hollywood.

Protests all across the world have taken place in the last two weeks after George Floyd was killed by a Minneapolis police officer on May 25. Los Angeles has had some of the most notable, with marches and demonstrations taking place from Long Beach to Beverly Hills. Some of the early protests even turned violent.

The Plummer Park Protests take place on the sidewalks of Santa Monica Boulevard, at the entrance to the city park. The first was on June 1 with a group of about 26 friends. It has since grown to more than 200. One of the founders, Cannon Grandison, said they started these demonstrations because they were hesitant to join the bigger marches.

“We were really disturbed by everything that was happening, obviously, and we were afraid to go protest because it was very dangerous in the beginning with the riots,” Grandison said. “And also COVID is happening right now, and we need to social distance and take those precautions as well.”

Grandison and the other organizers went out everyday for eight days straight from 10:30 a.m. to 3 p.m., holding signs, encouraging cars to honk their horns in solidarity, yelling chants about Floyd, Brianna Taylor, and others, and laying down on the grass or sidewalk at noon each day with their arms crossed behind them for eight minutes and 46 seconds, the same amount of time the Minneapolis Police officer had his knee on Floyd’s neck.

The Plummer Park Protests are continuing indefinitely, but they will now take place on Wednesdays, Fridays, and Saturdays. SWEET JANE attended a protest recently and interviewed five black women, including Grandison, about why they came out to show their support and what they think of the movement that has swept over the world. Here are their stories, told in their words. 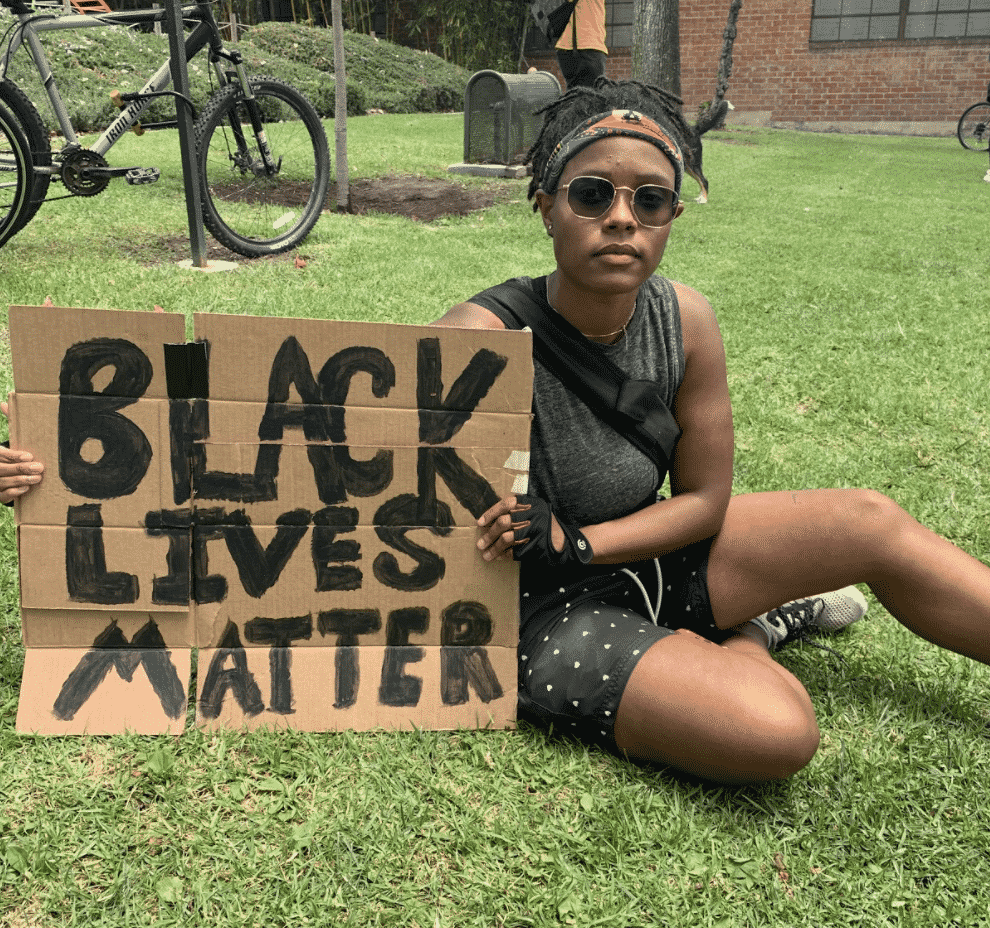 I’m a black American, but this isn’t just my fight. We’ve been fighting this fight for hundreds of years. My black skin is scary to people. For me, every day is a protest, just existing really. This protest was even more powerful with my friends. A lot of them are not black and for them to show solidarity and to really step up as allies was huge. I think it was equally as important for them to get out here and do what they can, use their privilege. I think it’s important for white people to use their privilege, to spread this message. Because black people have been fighting this fight for a very long time, and we can’t fight it alone. It obviously took the whole world to get four people charged. That’s really sad. That just goes to show how much people don’t want to listen to the Black Lives Matter message. And that’s really sad and disheartening.

I think this is a great teaching opportunity, first of all. And I think it’s very important to support this movement.

I was born at the end of the civil rights movement. At the school I went to, I was taught I was only three-fourths of a person. I was the only African American in the whole high school in Salem, Oregon. It was a Mennonite school. We didn’t have dances, but we had banquets, and I couldn’t go with anybody at the school because they didn’t believe in the mix of race. It was a really, really difficult time.

People are fed up. They understand that until we recognize that black lives matter in America, nobody’s life is going to really matter. I wanted to take this opportunity to teach my daughter where we’ve come from, where we are now. This is not a color issue, it’s a human rights issue. This is what I want to teach my daughter. We lived in China and she had friends from China,Japan, the Philippines,America, and England. We lived in China for eight years. We just moved back to America and had to deal with this.

So this is a great opportunity for me to teach my daughter that, even though there are people that say that color matters, look around you. This crowd is saying, “You know what? It doesn’t matter. We are all humans.” I love it. This made me cry because I came out here and I’m still the minority, but everybody is supporting each other. It’s incredible. I mean there’s different colors, different sexualities, different genders. It’s amazing. It’s sad that we have to fight for this issue. But it’s great to see that we can come together and stand for each other. 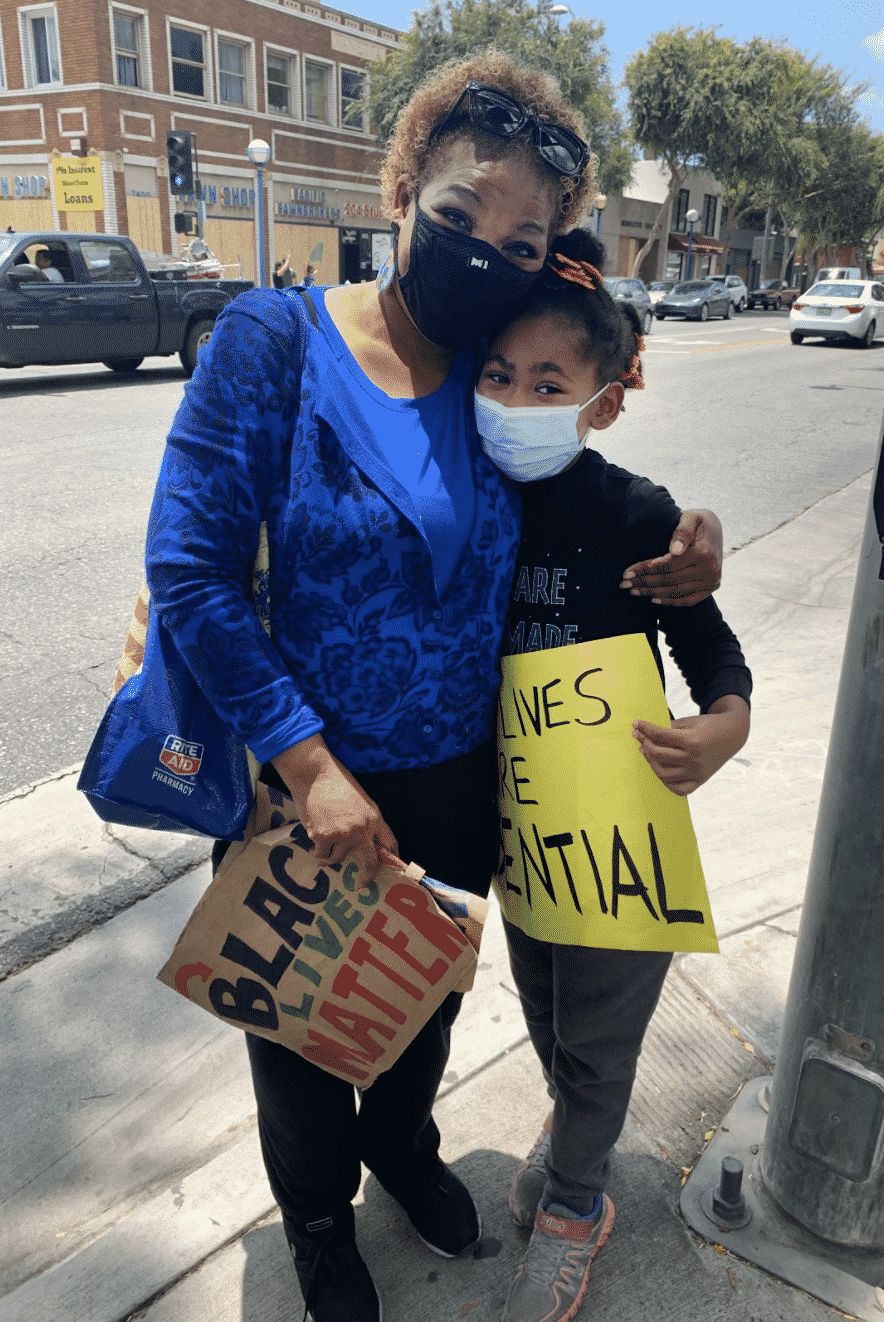 When I was in high school, in my social studies class, there were a lot of Mennonite children who, this was their first encounter with someone of color. They would call me names and would yell at me, and the social studies teacher would just turn his back.

We were the first African American family in Salem. Kids would throw rocks and spit on me, throw bottles at me, call me out by my name. There were grown men who had guns in their yard. When we passed they would say, “No n*ggers in our yard.” They wouldn’t let me play in their house with their kids. That was my experience in America. But because I had two parents who taught me who I was, I didn’t have to worry about what people thought about me. It was always what I thought about myself. So when I became a parent, that’s what I taught. It’s not what others say about you, it’s what you say about yourself. But here you have all these people. It’s not just the people that are standing here. People driving by honking their horns and saying, “Look, I support this movement.” It’s these people who are supporting you and you can be who you are and be proud of who you are. 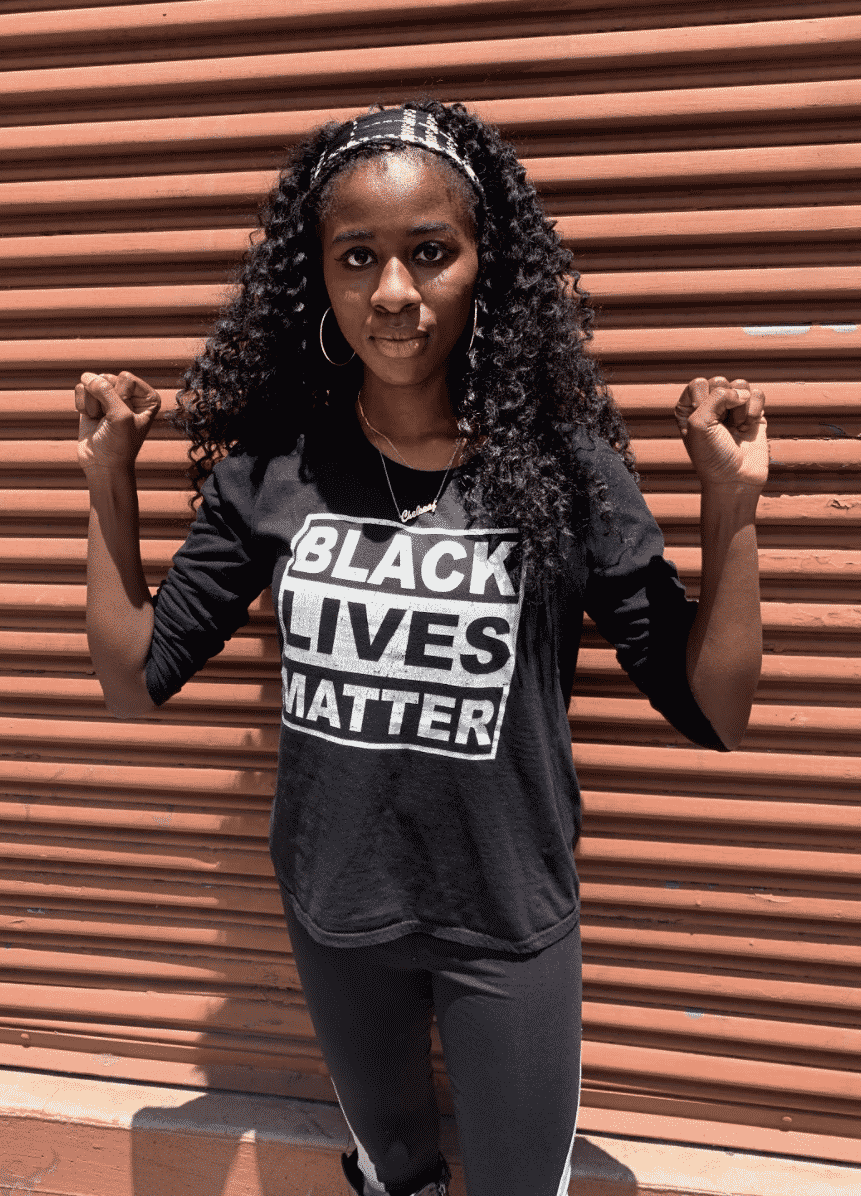 I’m here to stand in solidarity and to march and protest for my people. I really hate seeing everything on the news. To be honest, what affected me the most was Trayvon Martin, who was killed. I was 16 years old when that happened and that totally rocked my world.

My friend from college put this together. I’m so blessed to stay in contact with people who are about inclusivity and want to be an agent for change. I used to go to marches for Trayvon and Michael Brown. It’s sad that after years, after all of this time passing, I’m still here marching and protesting for the Black Lives Matter movement. I try to have positive messaging in my music, when I’m writing songs and things of that nature. I also have a podcast, Shea Butter  & Popcorn, it’s social commentary and things like that. I want to be able to continue the movement and be an agent for change in any facet I can. This time the movement feels different because it’s not just us in California or all over the nation. It’s all over the world. I’m seeing people marching in London and Wales and Denmark. People really care. People want to be progressive and they want to make a difference. That’s why I’m here, to make a difference, because enough is enough. No justice, no peace, no racist police. We have to work together to change the narrative, and it’s going to take people like us.

I’m out here today to help support the cause, to help raise awareness. I want to add my voice in as many ways as possible. I’ve already been sitting at home, signing petitions, but it comes to a point when you want to do more. I never really had gone to protests in past years. I kept missing them. But now they’re so regular that it’s really easy to come out, and I’m not even working right now anyway. Yesterday I was actually at Santa Monica City Hall. I just went around talking to groups of police the whole day and having conversations with them about the system. I actually listened to them and what they had to say, and they listened to me and what I had to say. It just felt so empowering to actually talk to them. I wish we would do that more. Because I noticed a lot of people weren’t talking. When you talk to them and you recognize their humanity, they recognize your humanity, too. And if everybody recognizes that then it’s really hard to abuse someone. When you recognize that they’re a living, breathing, human being, how are you going to dehumanize them? All the cops loved me after that. They were like, “You made me think of this in a different way.” Actually talking to them has a much bigger impact than just hurling insults at them. This is what happens when you build a relationship. This is what happens when you acknowledge each other’s humanity. 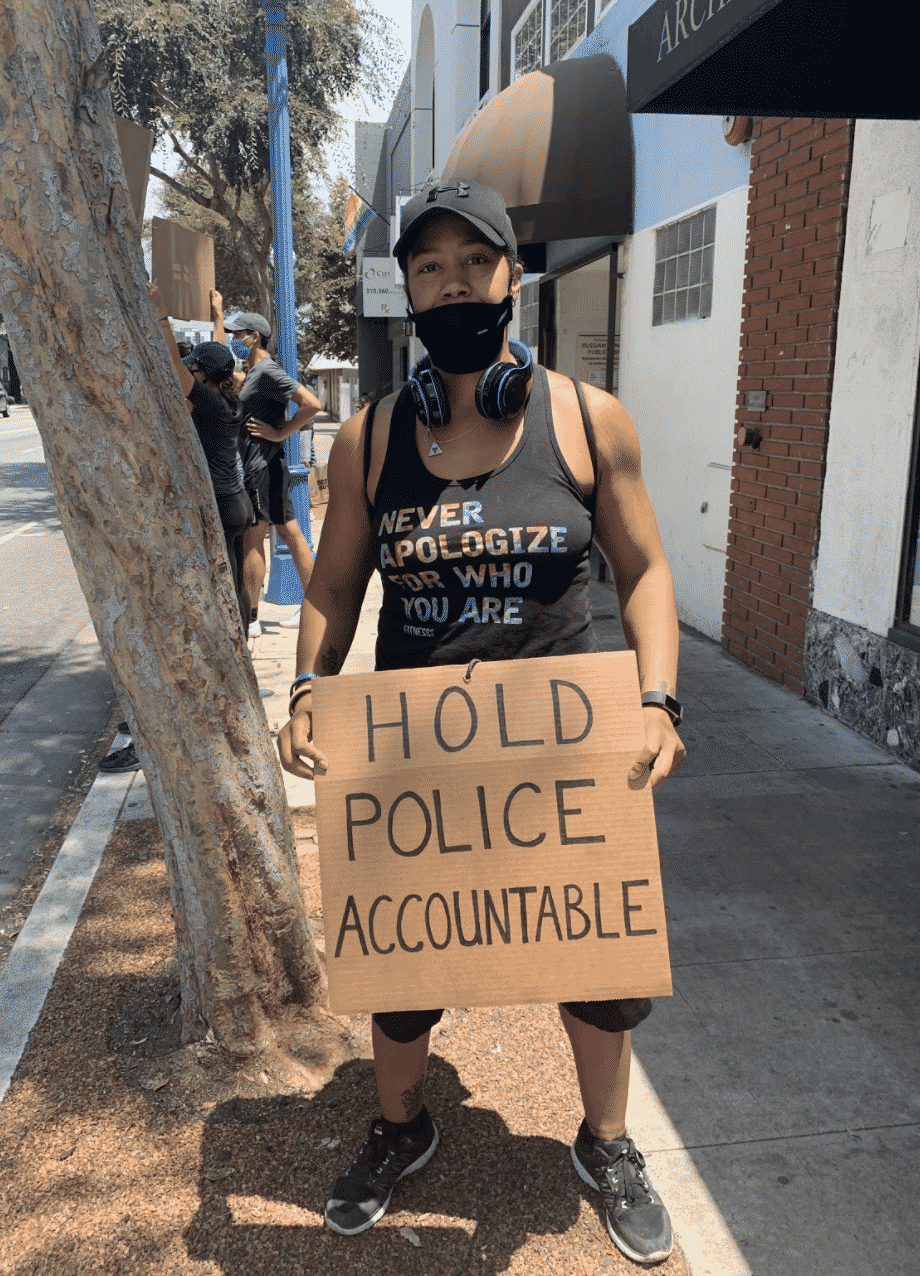 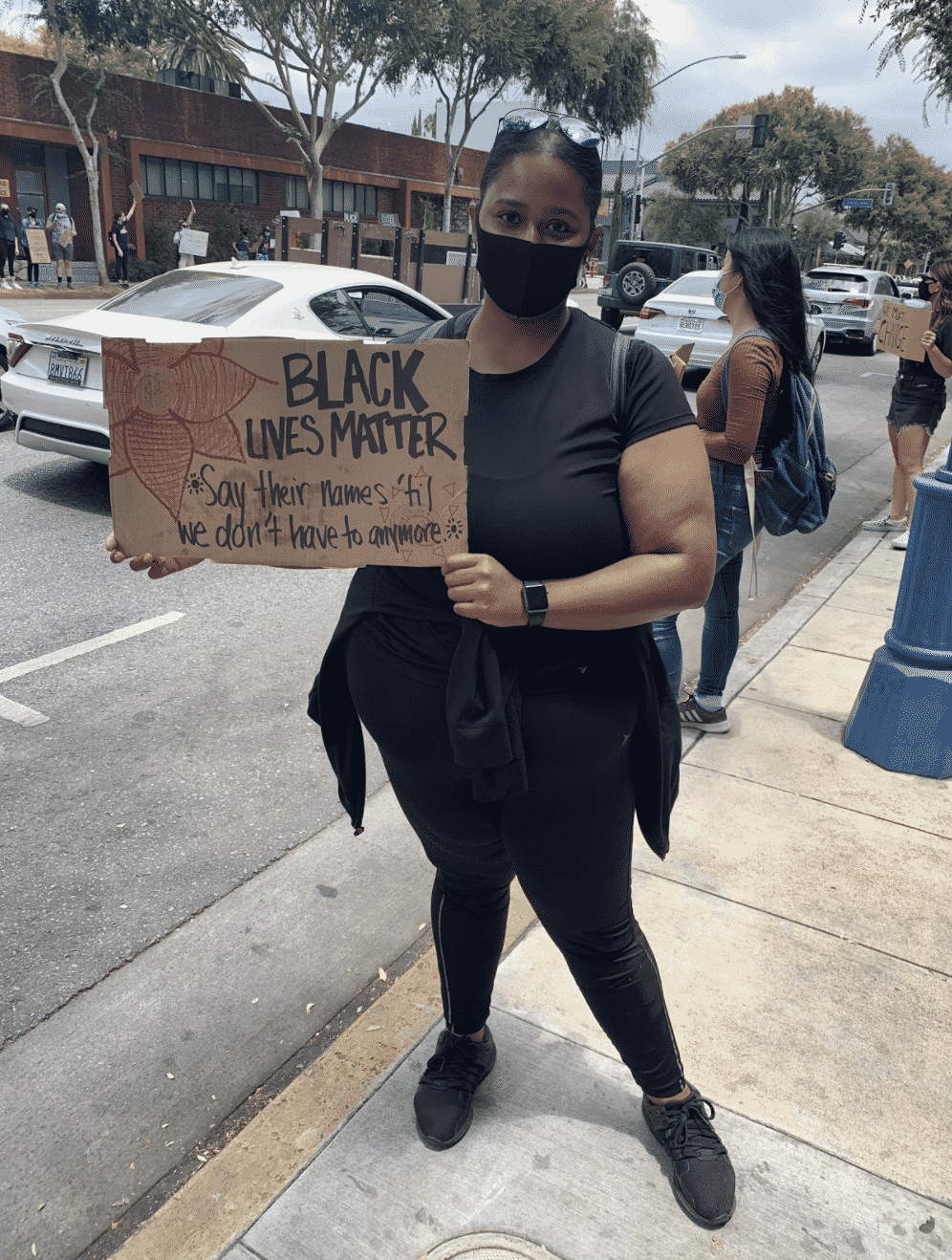 What brought me out here today was that disgusting video and, also, this has been an issue for a long time, and it’s all over America. I’m from New York, I lived in Cleveland for some time, and I experienced a lot of racism in both places. Coming to L.A., it was amazing to see how diverse it is. I’m honestly surprised to see so many people who are not of color out here in support, and I’m so grateful for it. Today is my first day out because I’ve been working during the week. I’ve really noticed the unity. The unity has brought so many people together, so many people from different places. It’s honestly how it should be. It brought me to tears so many times this week. I’m so grateful. It sucks that something like this has to happen for everyone to come together, but I’m glad at the waves this is making and how much it’s changing people.

We’ll continue to highlight the powerful work of peaceful protests through your words, amplifying the voices of black women, and their allies, in an effort to share the Black Lives Matter movement as far as possible. If you have a story to share, email us at hello@sweetjanemag.com.