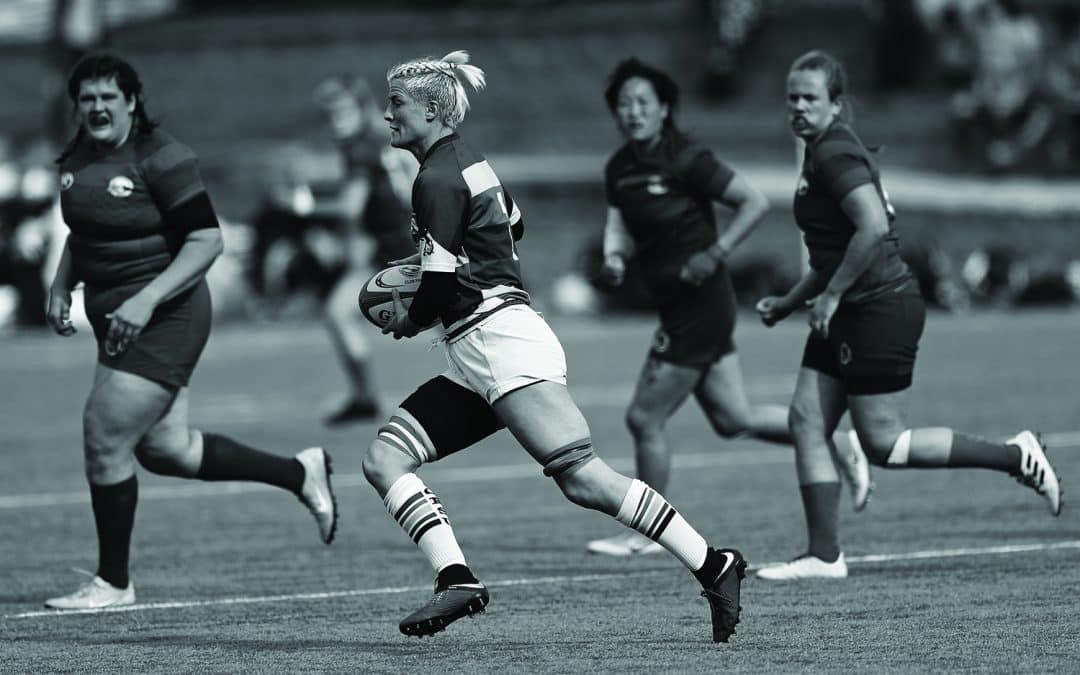 Anna Symonds trades alcohol for cannabis in world of rugby

For professional rugby player Anna Symonds, the therapeutic effects of cannabis became evident at one of the traditional post-game parties.

“With rugby, there’s a strong drinking component attached to the culture,” Symonds says. “That’s one form of pain relief that people have found after a game when you’re all bruised up.”

When she joined others and consumed cannabis at the party, she felt a “healing sense” of pain relief that she calls her “aha moment.”

“It wasn’t a deadening sensation like alcohol, which helps in the short-term but the long-term effects are not so great,” she says, noting that she instead felt her body healing. “I kind of went, ‘Oh, this is why you guys do this. It’s not just for fun.’”

Since that experience about 10 years ago—not her first with the plant, but one that changed her viewpoint of it—Symonds has incorporated cannabis into her recovery and sleep routine, especially as she prepares for competition.

“It helps with sleep, healing and muscle growth,” she says. “I’ve found that cannabis is a good way to calm and relax.”

Recent research confirms that Symonds isn’t alone. A study done by researchers at the University of Colorado-Boulder found that 82% of marijuana users in states where cannabis is legal say they use the drug shortly before or after exercise. Most used it after exercise than before, and 70% said it increased enjoyment of exercise, 78% said it boosted recovery, and 52% said it heightened motivation.

“People say they use it because it helps them to enjoy exercise more and to recover from exercise,” says lead researcher Angela Bryan. “We have heard anecdotally, again from endurance athletes, that it helps to alleviate boredom during long training sessions. But we don’t know exactly what the mechanisms are for these effects, and we hope to learn more in future studies.”

As more athletes at all levels—professional to weekend warrior to occasional—incorporate cannabis into their wellness routine, they have growing options as more states allow medicinal use, recreational use, or both.

Depending on her needs each day, Symonds uses a variety of products, from tinctures and capsules that are good supplements, to topicals before or after workouts, to flower or pre-rolls that provide more immediate pain relief and muscle relaxation.

“Cannabis is a great anti-inflammatory, CBD in particular,” she says, noting that many athletes she knows are choosing cannabis as a natural alternative to over-the-counter medicines like ibuprofen, aspirin, or acetaminophen that created a risk of gastrointestinal ulcers and bleeds.

“With CBD, it doesn’t hit the GI tract and affect it in that negative way,” Symonds says. “It does the same thing, but in a more elegant way.”

To spread the word about the benefits of cannabis for athletes and overall wellness, Symonds became an ambassador for Athletes for Care, a nonprofit that advocates for cannabis research and education.

“It’s been a really great group that has some very passionate people who want to share their stories and want to pay it forward. We’ve all experienced these great benefits to our health and well-being and want people to know about these options,” she says.

Many of the Athletes for Care ambassadors are former professional football players, which puts Symonds among a small but growing number of female athletes speaking up about their experience with cannabis—in part to raise awareness and in part to reduce the stigma of use.

“Women’s sports don’t have as much prestige or resources as men’s sports. So we might not have as much power or sway, socially speaking, generally overall across the board,” she says. “The flip side is that we might have less to lose as well. Some people are reluctant to speak out as active players—they might lose their jobs, sponsorships, selections to teams. That’s an issue that affects all of the athletes.”

But Symonds and others with Athletes for Care believe it’s important and worthwhile to go public and share how cannabis has helped them and may help others looking for healing, relaxation, or other types of relief.

“It’s hard to undo all of that stigma that’s been put so deep into people for years. Certain generations really had it hammered into them, and it’s hard to break those deep views and for people to really understand that it’s a lot more like the herbs your grandmother might grow in her garden,” she says. “It is a powerful medicinal herb, but it’s very full of promise to transform positively the way that we care for ourselves.”

She emphasizes that cannabis should be incorporated as part of a larger wellness routine.

“When we talk about health and well-being, cannabis is a great tool, but it’s just part of an overall healthy lifestyle that needs to include regular therapeutic movement—things like walking, dance, yoga, running—and a healthy diet,” she says. “Cannabis is gentle, but it’s not good for you to overconsume. Think of using this as part of a support for a healthy lifestyle. It’s not going to be a magic bullet, but it can have significant effects for those dealing with pain.”

Photo by Travis Prior